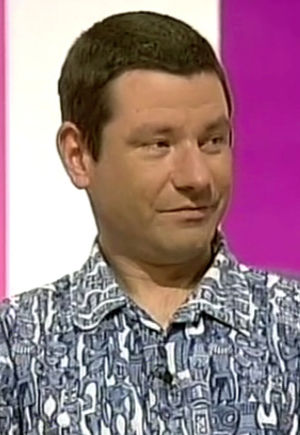 John Mayhew was an octochamp in and the champion of Series 53, as well as a participant in Championship of Champions XII.

“The Plymouth Pulverizer”, as he became known as on the show, started his Countdown career by deposing Gary Buxton from the champions chair with a century, following it up with another. He spotted 2 nines in his octochamp run: SUNDERING and INTERVALS, made obvious by sitting back and looking at the clock.

Returning for the finals, he beat Chris Hunt in the quarter-final in a tight game before defeating C4C forumite Jon O'Neill by just 1 point in a needle match. The final, Richard Whiteley’s last ever show due to his sad death, was a nerve-affected affair with neither playing great. The score was dead level going into the conundrum, and neither player managed to spot that ARTGENIUS became SIGNATURE, before Mayhew unscrambled FALSIFIED in 3 seconds to become series champion.

He returned for Championship of Champions XII, but was eliminated in the first round by Paul Howe, who impressively unravelled GEOMATICS to win by 30 points.

His own record of his experience on the show can be read on The Countdown Page here. There, he infamously claims that the Series 53 final had a third conundrum that was recorded but never broadcast, however no-one else who was present in the studio at the time recalls this event.

* includes 10 points from a tie-break conundrum
Retrieved from "https://wiki.apterous.org/index.php?title=John_Mayhew&oldid=127294"
Categories: