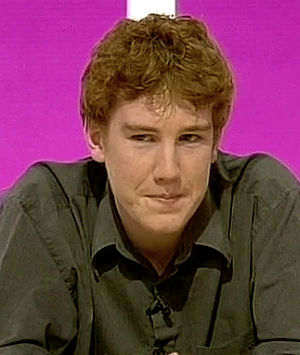 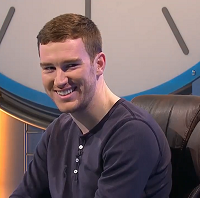 and eight years later in the 30th Birthday Championship! 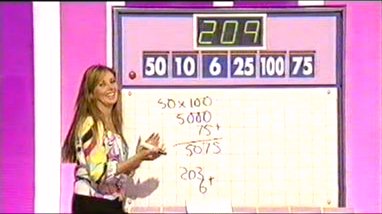 Carol marvels at another of the ginger genius's outrageous solutions.

Jon O'Neill was an octochamp in Series 53, a participant in Championship of Champions XII and a semi-finalist in the 30th Birthday Championship. He is also an Apterite.

He started off with a narrow 20 point win over Steve Smith before scoring 96 against Peter Wallis. All of his next 5 games were centuries including a high score of 114 against Theresa Turrell. In his final game, he dropped to 94, but still qualified for the finals as No. 3 seed with 804 points.

In the semi-final, he faced John Mayhew, the No. 2 seed with 811 points. O'Neill led by 7 points going into round 13, where he was beaten by THEOREMS and trailed by 1 point going into his choice of numbers. Controversially, he didn't choose 4 large and went for just 1 large number. Both players scored 10 points and the lights were dimmed for a crucial conundrum (EROGENICC), but neither player could solve it and Mayhew won the game by a solitary point. It was the second conundrum of French origin in a row that O'Neill had failed to solve.

One year later, O'Neill was invited back to the Championship of Champions XII, and faced Series 52 octochamp Jack Welsby. O'Neill started badly, missing AMOEBAS. O'Neill couldn't beat Welsby in any letters rounds, and uncharacteristically was beaten by Carol in both choices of 4 large numbers. O'Neill did get the conundrum FAYRPOINT but it was Welsby that won the game by just 5 points.

O'Neill returned to Countdown in 2013, as one of 41 contestants taking part in the 30th Birthday Championship. He received a bye to the first round, and won his first game against Series 59 semi-finalist Kai Laddiman by a score of 101 – 76. O'Neill then beat Series 6 champion Darryl Francis in his second game, scoring a personal best of 122 in the process. He then equalled his personal best in his quarter-final against the Series 66 champion Jack Worsley, and in the process, he achieved a max game, becoming only the third person in the history of the 15 round format to achieve this feat. In the semi-final, he played the formidable Series 54 champion Conor Travers. He managed to hold Travers for nearly every round, but his gamble of sulphated ☓ in round 6 backfired, and Travers solved the conundrum FINEGIRTH in one second to achieve an unprecedented third consecutive max game. O'Neill’s semi-final spots make him among the strongest players to never win a series.

On 19 September 2014, he was a special guest on 8 Out of 10 Cats Does Countdown Series 5, Episode 3. Jon joined Sean Lock and Jo Brand's team. Unfortunately, he missed a numbers target to Jon Richardson, saying it was hard to concentrate, but did redeem himself by solving the conundrum SNOGAMILF in under a second.

In 2009, he became the first moderator of the Off-topic sub-forum on c4countdown.

His attendance (and of course, victory) at CoLei2 2009 has caused one c4c forum member to confess to another to have considered him to be the 'most attractive man in the room', a quality not diminished by Jon later putting an empty 'Celebrations' tin on his head. He has a face capable of carrying off such a jaunty appendage.