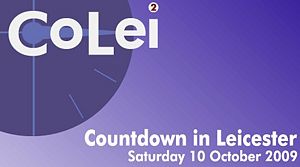 CoLei2, held in 2009, was the second time that Countdown in Leicester was organized. It took place on Saturday 10 October at The Stoneycroft Hotel in Leicester, and was hosted by Jeff Clayton. It was won by Jon O'Neill, who beat Kirk Bevins in the final 100 – 97.

Twenty-two people entered this time, compared to nine in 2008. As with 2008, the line-up included the three series winners: Ben Wilson from Series 46, Mark Tournoff from Series 52, and Kirk Bevins from Series 60.

The tournament started with a qualifying round of 14 rounds (the same as the old finals format), in which every contestant played independently. The rounds for this were preselected by Jeff. This game decided the seeds. However, the actual pairings were picked randomly. The first game was 15 rounds, and the next two games were 9 rounds (due to time constraints). The final game was between consecutive seeds (1st plays 2nd, 3rd plays 4th etc.) and was played for final position; every game apart from the 'final' between O'Neill and Bevins was played with 9 rounds. After this the final was played as an exhibition match with 15 rounds.

* This is not the same Steve Wood who was reigning Countdown champion at the exact time of this tournament, nor the Series 10 contestant with the same name.