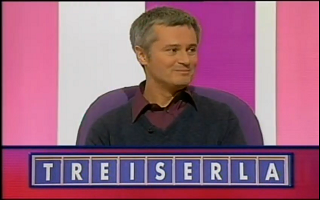 Mark Tournoff in the process of missing RETAILERS in Series 52... 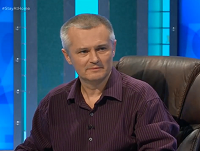 ...and nine years later in the 30th Birthday Championship!

Mark Tournoff (born 1962) was an octochamp in and the champion of Series 52, runner-up in Championship of Champions XII and a participant in the 30th Birthday Championship.

Scores of 117 and 111 in his heat games helped Tournoff become an octochamp, with an average score of just over 101 points to secure his place in the 800 club. He returned for the series finals as #3 seed, and straight away trounced fellow octochamp John Gray by 65 points, setting the second-highest score ever in the process. The lead changed hands several times in Tournoff's semi-final against Jack Welsby, but Tournoff unscrambled the difficult crucial conundrum in eight seconds to stake his claim to an appearance in the series final. He faced #1 seed Paul Gallen who led the game for 14 rounds. However, having miriad ☓ disallowed in round 13 set up a crucial conundrum, which Tournoff solved after 27 seconds to come from behind and win the series.

Tournoff had a comfortable start in the Championship of Champions, easing past Steve Graston by 119 points to 83. His quarter-final against Matthew Shore was arguably one of the closest games in the history of the programme, with neither player ever leading the other by more than ten points. Tournoff solved a predictably crucial conundrum after just one second to run out the victor by seven points, setting two records in the process: the highest losing score for Shore's 117, and the highest aggregate score of 241. He won his semi-final against Paul Howe on his fourth crucial conundrum, setting up a rematch against Paul Gallen. This time the crucial conundrum went the way of Gallen, who won the tournament by 18 points and was just one round away from setting a max game in the final.

Tournoff remains an active member of the Countdown community. He has written a book about his experiences on the programme, has taken part in several unofficial tournaments and is also an Apterite.

Tournoff first appeared on Countdown on 15 November 2004, the game immediately after Steven Moir retired as an octochamp. His career on the show got off to a quiet start against fellow challenger Margaret Boyle. Tournoff failed to score in the opening round after unsuccessfully risking tremulo ☓, and was later denied one more when he offered SHORTED in a selection with the common eights ASTEROID and HARDIEST. In spite of this, Tournoff still dominated the game and ran out the winner by 92 points to 46. In his second game against Brian Pulman, the words APRICOTS and GADROON helped Tournoff to amass the first of his five heat centuries. Mark's third game got off to the shakiest possible start, as his round one offering RANCID was eclipsed by challenger Ronnie Boyd's nine MANICURED. Incredibly, Tournoff gained the upper hand just two rounds later with the nine-letter word PRINTHEAD. His twelve point advantage at the end of the first half had grown to a lead of 51 points by the end of the game, which Tournoff won 111 – 60.

His fourth victory against Samantha Latham was tighter than the final scoreline of 101 – 68 would suggest. Latham held her own on the numbers and even beat Tournoff in round 14, but by beating her outright on five of the eleven letters games Tournoff was guaranteed victory. In his fifth heat game against John Crockett Tournoff didn't any find spectacular words. However, he played with astonishing consistency, scoring in all fifteen rounds. He scored 30 out of 30 on the numbers and dropped just four points on the letters, and unravelled the apt conundrum LIBRALINT to round off his brilliant performance. Tournoff came slightly off the boil in his sixth game, dipping beneath the century mark for the first time in four games. However, he still won by a convincing 51-point margin.

Tournoff's penultimate match against Keith Jones saw the future champion fail to score in four rounds, as well as missing the nine RETAILERS and the conundrum EARTHCLAD, putting in his worst total of 79 points. In his final heat game versus Diane Crews Tournoff showed a rapid return to form, beating Crews in nine rounds with words including MALTOSE and PROFILER. The conundrum LILAQGUNS rounded off his octochamp run with a final heat games aggregate of 809 points.

Tournoff returned to TV screens less than three weeks later for the series finals. In his quarter-final against #6 seed John Gray, Tournoff was on impeccable form. He spotted two nine-letter words, LOFTINESS in round 1 and EMIGRATED in round 11, and totalled 138 points out of a possible 141. This is one of the best percentage scores ever recorded, and remains the joint second-highest score of all time; only Julian Fell has managed an equal or higher score. In his semi-final against #2 seed Jack Welsby missing the word LIBRATES saw Tournoff go behind by eight points at the end of the first half. Part two looked likely to go Tournoff's way as he beat Welsby on three rounds in a row, spotting the nine VERONICAS along the way. However, Welsby fought back with PALMATE and a perfect numbers solution to reduce his arrears from 24 points to 7. The game stayed close and concluded with a crucial conundrum, wherein Tournoff unscrambled AMENUTREE to win by 15 points and claim his place in the final.

Standing between Tournoff and the leather-bound dictionaries was the impressive #1 seed Paul Gallen. The final initially went to form, with Gallen beating Tournoff with FIACRES and MITOGENS, but getting one away on the first numbers game allowed Tournoff to reduce the deficit to five points. In part two the players scored equally in every round, leaving Tournoff still five points down going into the third half. In round 12 Tournoff had internets ☓ disallowed, meaning Gallen only needed to score in the next two rounds to ensure a non-crucial conundrum. However, immediately afterwards Gallen risked miriad ☓ when Tournoff declared MIKADO, allowing him back into the game. Both players were one away on the final numbers, leaving Tournoff trailing 89 - 82 going into the conundrum. GREATDRIP was unveiled, and the game looked over as Gallen buzzed on 1.5 seconds. However, he gave no answer, and with time running out Tournoff himself buzzed in with the correct answer PARTRIDGE, winning him the series by just three points.

Tournoff was the first person to win a 15 round series without being the #1 seed.

Tournoff returned in Summer 2006 for Championship of Champions XII, wherein words including COASTLINE, EXORDIAL and IPOMOEA allowed him a comfortable win over series 51 runner-up Steve Graston. He faced Matthew Shore in a high scoring quarter-final, with both players finding two nine-letter words and just ten points separating them after 11 rounds. Tournoff was leading 104 - 94, but came unstuck with two disallowed offerings. Both players solved the final numbers to take the game to a crucial conundrum. Tournoff unravelled SILLYQUOO after just one second, relegating his adversary to a losing score of 117 - the highest ever. This game also holds the record for the highest aggregate score. Tournoff's semi-final was equally dramatic, with the turning point coming after 13 rounds as Paul Howe's offering of formatise ☓ was disallowed. This ensured a crucial conundrum, which Tournoff solved to qualify for the Championship of Champions final - against his old rival Paul Gallen.

In the final, both players impressed with all maximums across the first 11 rounds, including the impressive STARFISH in round 1 and CELLARET in round 6. Gallen took the lead in rounds 12 and 13 with TELECOM and DYSPNOEA respectively, staying on target for a max game. In something of a flashback to their series final, all Gallen needed to do was score on the final numbers game to avoid a crucial conundrum. He looked set to do so, with the 880 target elduing both players but Gallen offering 882 to Tournoff's 876. However, he was unable to give a correct solution. This let Tournoff in, and he duly set up the two players' second crucial conundrum against one another. This time Gallen made no mistake, unravelling PRONEPIPE in just two seconds to take the twelfth Championship of Champions title. Both players stood on 14 wins from 15 games, their only defeats being to one another.

The cover of Tournoff's book Crucial - A Champion’s Tale.

He returned to Countdown in 2013, as one of 41 contestants taking part in the 30th Birthday Championship. He won his first match against Series 28 contestant Nick Deller by a score of 101 – 100, before losing to the Series 54 champion, Conor Travers in a match which Travers maxed 14 of the 15 rounds.

Tournoff has since written a book about his experiences on Countdown, titled Crucial - A Champion’s Tale. Notably, the cover shows the Countdown clock stopped at 27 seconds, the exact amount of time it took Tournoff to solve the conundrum in his series final. He also regularly participates in unofficial Countdown competitions, winning CoLei 2008, coming runner-up in COLIN 2005 and CoBris 2006, grabbing the wooden spoon at COLIN 2006 and COLIN 2007, placing fourth in COLIN 2008, and making the top ten at COLIN 2009, CoLei2, COLIN 2010 and CoLei3. He then attended COLIN 2011.