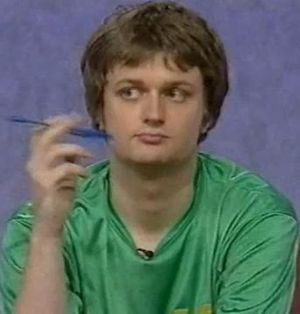 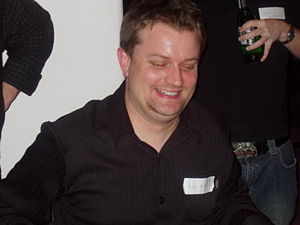 His 5 wins were enough to see him into the final rounds as #3 seed, where he defeated Stuart Barker 56 – 46 in the quarter-final. Pete took an early lead, but Stuart caught up with CLEMENT and the final numbers game, making the scores dead level going into the conundrum DUBLLZERO. Pete solved it to move on to the semi-final, where he beat Natascha Kearsey in a rematch of their heat game. The players were fairly evenly matched in the seedings. However, Natascha failed to score in any of the last four rounds, thus setting up a grand final encounter between Pete and Dag Griffiths. The final was a closely-contested affair of a high standard, featuring spots such as KLAXONS, and Griffiths was leading by just 3 points going into the crucial conundrum. GIANTUSDJ was displayed on the conundrum board, and Cashmore's buzzer was the first to light up in just one second. He correctly answered ADJUSTING to become the 35th champion of Countdown.