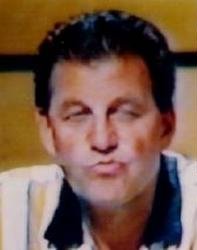 Peter Evans was the Series 5 champion.

From Coventry, he first appeared on 8 November 1984, beating Leslie Olson 67 – 48, the joint highest score of the series. He only won two more games before losing at the hands of Jane Smith. However, this was enough for him to return for the series finals as #4 seed. He 'took revenge' on Jane Smith in the quarter-finals, defeating her 49 – 38, and beat #2 seed Colin Pearce 53 – 43 in a close-run match. In the final, he faced Bob Violett, running out the 87 – 71 winner.

He returned for Championship of Champions II, and made it all the way to the final where he faced Clive Freedman in a nail-biting contest. 10 points ahead going into the conundrum, Evans could only sit and watch as Freedman unscrambled two consecutive crucial conundrums to run out the 91 – 81 winner. Evans also appeared on the special episode to celebrate Countdown's 500th show on 2 February 1987, and competed in the Countdown Masters in 1989 and 1990.

Evans returned in 1996 for the Supreme Championship, but was defeated in his first game 50 – 28 by Evan Simpson, denying him a mouth-watering rematch with Freedman in the following round.