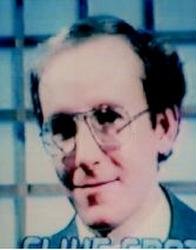 Clive Spate was the champion of Series 8, and a participant in Championship of Champions II and the Supreme Championship.

From Mansfield, Nottinghamshire, he first appeared on 30 January 1986, defeating Malcolm Edwards 66 – 28 and went on to win five more games, all with scores over 50 points, including 70 (the highest of the series) against Michael Purdie. He was defeated in his seventh game, though, by David Learner 54 – 46. Spate's six wins and impressive points haul were enough to earn him an invitation back for the final rounds as #1 seed, where he made short work of Tony Clarke and YT in the quarter- and semi-finals respectively. In the final against Anthony Butcher, it seemed to be slipping away from Spate as he had EARHOLES disallowed and slipping behind by eighteen points. By the first commercial break, however, he had recovered to a 2 point lead, and after successfully risking the now-invalid word DOMINATER for eighteen points, Spate eventually ran out the winner of the match and the series by 107 points to 53 — the first century score ever achieved on Countdown. Surprisingly, Spate was the first player to win a series of Countdown after being seeded #1.

Spate returned for Championship of Champions II, narrowly losing to Peter Evans in his first game.

Spate also played in the Supreme Championship, soundly beating David Reid in his first game before losing by three points to Jackie Mcleod in his second and final game.

Away from Countdown, Spate has proven to be one of the most successful British game show contestants of all-time. In 1987, he became the first unbeaten player of BBC Two's word game-based series, Catchword. He reached the Grand Finals of the first two series of Fifteen to One in 1988, before winning an episode of The Weakest Link in 2001 and £125,000 on Who Wants to be a Millionaire? in 2004. In 2003, Spate won a top prize of £50,000 by winning the only-ever series of the Carol Vorderman-fronted quiz show Grand Slam, which determined the greatest-ever quiz show contestant and featured players such as Olav Bjortomt, David Stainer, Graham Nash and Mark Labbett among others.

Spate was also a big name on the Scrabble scene, having been a recognised UK Grand Master as well as the organiser of the former, then-popular twice-yearly Nottingham Nomads tournament.