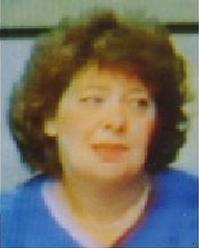 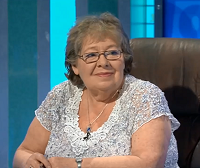 ...and 22 years later in the 30th Birthday Championship!

Jackie McLeod was the runner-up of Series 21, and was a participant in the 30th Birthday Championship.

She was a Local Government Secretary from Highgate, North London. She won 3 games in the heats before losing to Malcolm Mackinnon. This was enough to see her return for the final rounds as #8 seed, and she beat Lew Schwarz and Nick Saloman on her way to the final against Barry Grossman. However, McLeod lost the final 99 – 67, Grossman's quicker conundrum finger being the major difference between the two.

McLeod returned for Championship of Champions VI, but was beaten in the first round by Chris Waddington.

McLeod also played in the Supreme Championship, beating series champions Lawrence Pearse and Clive Spate in the first and second rounds respectively, before losing to Joyce Cansfield in the group finals.

She returned to Countdown in 2013, as one of 41 contestants taking part in the 30th Birthday Championship. She lost her only match in a rematch of the final against Barry Grossman by a score of 79 – 65.

She is also a Scrabble expert and has appeared on several quiz shows, including the short-lived Channel 4 show Beat the Nation in 2004, BBC One's !mpossible and ITV's Alphabetical in 2017 and ITV's Who Wants to Be a Millionaire in 2019. She has also won a series of Turnabout and an episode of The Weakest Link.