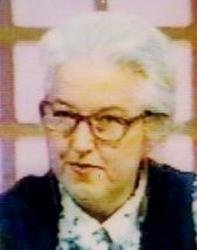 Joyce Cansfield (8 October 1929 - 12 October 2019), a housewife from Otley, was the first ever series champion of Countdown. She was also runner-up of the inaugural Championship of Champions and a quarter-finalist in the Supreme Championship.

She made her debut on 11 November 1982, on the 7th episode of the series (and thus the show), beating John Simpson to become only the third-ever daily champion of the show, as well as the first woman to have ever won an episode of Countdown. In one game of her run, Cansfield also achieved 65 points, the second highest score of the series. Cansfield drew against Helen Grayson in the following show before losing to her the day after. However, at the time, seeds for the grand final (there were no quarters or semis) were determined by highest scores, and Cansfield thus made it to the grand final against Michael Wylie. Therein, she emerged the winner, 59 – 41, after solving a very apt crucial conundrum. She was awarded 13 volumes of the Oxford English Dictionary as a prize.

She later returned for Championship of Champions I, losing to Mark Nyman in the final. Cansfield also appeared on the special episode to celebrate Countdown's 500th show on 2 February 1987, and competed in the Countdown Masters in 1989.

In 1996, Cansfield returned for the Supreme Championship. She entered the event at the group semi-final level, having received a bye. Her first game was against Stephen Balment, and although Balment solved the conundrum NAMIBIAPH, Cansfield emerged the winner. She next played Jackie McLeod in a closer game, in which she looked in danger of a crucial conundrum but avoided it when McLeod missed a tricky 901 target. However, Cansfield succumbed to boy wonder Allan Saldanha in the series quarter-final when he achieved a max game.

Between 2002 and 2003, she filmed a 15-round game against Series 2 finalist Dixie Baird, but this has never been broadcast. In 2008, 26 years after she first appeared on the show, Cansfield returned again to the Countdown scene for the unofficial tournament CoNot 2008, organized by a fellow series winner, Ben Wilson.

She first appeared on the Calendar Countdown pilot episode filmed in 1981, but this was never broadcast.

Joyce Cansfield won the the UK National Scrabble Championship in 1980 and is the first of only two people (the other being Craig Beevers) to have been both UK Scrabble champion and Countdown series champion. She was also a long-standing setter of The Times crossword puzzles.

Cansfield sadly passed away after a long illness on 12 October 2019, aged 90.