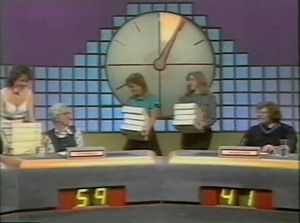 Joyce Cansfield presented with her dictionaries by Carol, Beverley and Linda after winning series 1.

Joyce Cansfield played Michael Wylie, with Joyce Cansfield winning 59 – 41. The Dictionary Corner guest was Kenneth Williams, and the lexicographer was Mary. It is thought that both Carol Vorderman and Dr Linda Barrett were the "vital statisticians", and both appeared at the end of the programme.

Notably, in this episode the conundrum was the word CONUNDRUM.

After the presentation of Cansfield's prize, Richard Whiteley concluded the episode, and the series, with a wish for viewers to have "a very merry nine-letter word". This was followed by the reappearance of the conundrum scramble board, bearing the letters SAMTRICHS, and finally, Cathy Hytner pulled the lever to reveal that this unscrambled to CHRISTMAS (though CHRISTMAS would not in fact be valid on Countdown, as it is capitalised).