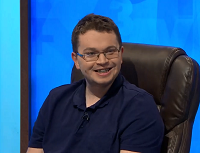 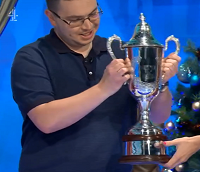 James Haughton was an octochamp in and the champion of Series 81. He's a Maths PhD Student at the University of Manchester.

Co-events and on screen

The Apterite began attending Co-events in 2018, and after rapid improvement, he won his first FOCAL event, CoNuT in 2019 – all prior to his run on the show in July of the same year, in which he began his run with a strong début score of 118 and a spot of the nine-letter word ROUTINISE. He then continued a high-scoring run, scoring centuries in all his games, spotting impressive nine-letter words and unravelling 6 conundrums correctly. He ultimately wrapped up his run with 958 points – the 5th-highest ever at the time – to become the second octochamp of the series and ultimately the number 1 seed.

Six months later, Haughton returned for the finals against number 8 seed David Law. Haughton thundered off into a 46-point lead after the opening three rounds by spotting two nines – NEFARIOUS and MONRADITE – and maxing the first numbers round. Another nine letter spot of the word UNROASTED helped him finish the game with 147 points – the third-highest score ever – therefore booking a spot in the semi-finals. Law did add an S to Haughton's offering of SAILING, though, denying Haughton from eclipsing the current highest ever score of 152. Haughton then battled Morgan Sauer in the semi-final. Although both players missed deceptive 4-large games under pressure, Haughton scored in every round except the conundrum and added yet another 18 points to his total with MEDIATION to advance to the Grand Final.

In the ultimate show of the series, Haughton played against number 2 seed Jamie Wing. Both players scored in the first two letters rounds until Haughton solved the first difficult numbers round to take the lead. Haughton then extended the gap to 25 points by finding PERINEUM and beating Wing in a 6-small numbers game. Both players then matched each other in the remaining rounds prior to the conundrum, and hilariously made complex solutions on the final rather easy numbers game. Wing solved the conundrum to take his score to 95 and Haughton won the series with 110 points to receive the Richard Whiteley Memorial Trophy and thus remains unbeaten. Haughton amassed 1,328 points across his run of 11 wins – at the time, the second-highest ever accrued by a series winner after Zarte Siempre.

As a result of the following series being extended to December after a 14-week COVID-19 hiatus, Haughton is the longest-reigning series champion of Countdown, having retained the title for almost a full year.