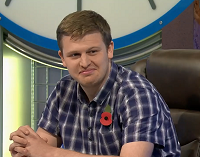 Sauer first appeared on 4 November 2019 against Sarah Buchanan and took off with a score of 81 points. The rest of his run saw him score 4 centuries. He eventually garnered 775 points to become an octochamp and qualified for the finals as number 4 seed.

Sauer returned for the finals and faced Andy Evans, the 5th seed, in the last quarter-final of the series. Sauer played nip and tuck with Evans and eventually went ahead before Evans bounced back with strong word plays and was ultimately ahead by 9 points after beating Sauer in the last numbers round. However, Sauer managed to solve a crucial conundrum and won by just one point.

Sauer's semi-final opponent was the number 1-seeded James Haughton. Although both players managed to find MEDIATION for nine, Sauer was unable to keep up with Haughton's 4-large ability and strong word power, as he bowed out in his first defeat. Sauer amassed an overall score of 932 points in his run.