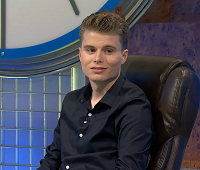 He took on 4th seed Morgan Sauer in the last quarter-final of the series. Both players fought nip and tuck throughout; after the second commercial break, Evans converted a 13-point deficit into a 9-point lead between rounds 12 and 14 by taking successful gambles on MOLASSED and APORIAS, followed by managing 1 away on the last difficult one-large numbers round while Sauer only managed 7 away. Unfortunately for Evans, Sauer unravelled the crucial conundrum THEFRIDGE in 15 seconds to end Evans's unbeaten run and win by one point. Evans garnered an overall total of 827 points in his run.

While waiting for his finals appearance to be screened after his heats were shown, Evans made 12 appearances on ITV's Cash Trapped, which were filmed approximately a year before airing, one of which was sampled for an edition of It'll Be Alright on the Night.

* includes 10 points from a tie-break conundrum
Retrieved from "https://wiki.apterous.org/index.php?title=Andy_Evans_(Series_81)&oldid=148879"
Categories: