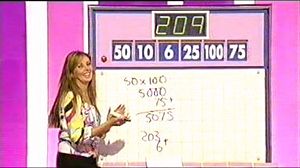 Example of one of Jon O'Neill's numbers games.

The game involves a board of 24 numbered cards, initially arranged face down in a layout of four rows as follows:

One contestant chooses from where in this layout six numbers are to be picked. Contestants variously choose a specific pattern (e.g. the inverted T), the number of cards to take from each row, or simply the quantities of large numbers (25–100) and small numbers (1–10). At yet other times, a contestant would give the arithmetician a free choice.

A three-digit target number is then generated by CECIL, and the contestants have 30 seconds to make the target number (or as near to it as possible) from some or all of the six numbers. The target can currently range anywhere from 101 to 999, although a most likely older version of CECIL generated 100 on several occasions, the last being in Episode 6405.

Each of the six chosen numbers may be used only once in any solution. Only addition, subtraction, multiplication and division may be used; moreover, no fractional numbers or negative numbers may appear as part of a solution.

Disregarding the order in which the working numbers appear on the board, there are a total of 11,905,457 different possible numbers games. Of these, 10,858,746 (91.2%) are perfectly solvable; 941,822 (7.9%) are impossible to solve perfectly but possible to score points in by being 10 or fewer away from the target; and 104,889 (0.9%) are impossible to achieve any points in, with nearly all games in this last category featuring six-small selections.

During Episode S26, a special between the 2009 series champions Chris Davies and Kirk Bevins, the usual large numbers were replaced with the "nasty" alternatives 12, 37, 62 and 87 (the latter two revealed during Episode S29, assuming they were the same in both episodes). Ironically, the use of the "nasty" large numbers statistically increases by some margin the likelihood that games will be solvable.

The most commonly chosen selection is one large number. An example would be:

With very low targets, usually under 200, it's possible to use the large number last and add it on. In this case, we would need to make 198 from the remaining numbers, which is not possible in this case.

The scoring system is as follows:

Only the contestant whose solution is nearest the target scores.