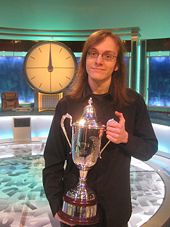 Chris Davies was an octochamp in and the champion of Series 61, and a participant in the 30th Birthday Championship. He was a musician and charity shop volunteer from Greasby in Merseyside, who on his first show impressed not only with his defeat of Scrabble player Ed Rossiter but also with his exceptionally fast Rubik's cube solutions. He continued to delight audiences all through his octochamp run with a series of very high scores, all but one of them a century. Three months later, he returned for the finals, demonstrating that he had lost none of the techniques which have also made him a big name on Apterous. Victory over fellow octochamps Steve Wood, Innis Carson and record-holding Andrew Hulme saw Davies claim the series.

Having beaten Ed Rossiter in his debut game, Davies faced Matt Shepherd the following day. He failed to secure a century after missing the target on all three numbers games. Nevertheless, words including PUEBLOS and TANDOORI gave him a convincing victory by 95 points to 46. This points difference was eclipsed the following day against opponent Julie Lane, who was able to equal Davies in five rounds but otherwise failed to score. Davies ran out the winner by a margin of 75 points. Michael Jocelyn suffered an even worse fate as words such as SEPTUPLE and ISOMERS and the conundrum IMISSBOYS created a scoreline of 113 – 37 in Davies' favour - an even greater margin than the day before.

Having so far failed to find a nine-letter word in his heat games, Davies found two in the first four rounds against Ross Mackenzie. However, Mackenzie found them both as well and was on Davies' tail throughout the game. The pressure almost seemed to help Davies who secured victory through the words MALAPERT and the Darrenic PUPATED. After solving the conundrum CIRCUSHEN, Davies had amassed a score of 139, the second highest of all time. Further Darrens including RIBCAGE and RIVULETS, along with the nine-letter word SCLEROTIA, led Davies to victory in his sixth game against Jonathan Seal. Of note, in round two of this game Seal beat Davies' six-letter word LINERS with the seven-letter FLORINS, the first time Davies had failed to score in 51 consecutive rounds. A pair of centuries helped Davies convincingly win his last two heat games against Marcus Bearpark and John Smoker respectively. 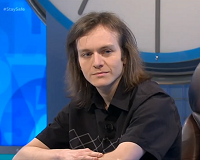 Three months later Davies returned for the finals as number two seed behind Andrew Hulme, who had amassed a record breaking aggregate score of 930 points across his octochamp run. Against fellow octochamp Steve Wood, the words RELLENOS and RANDOMISE helped Davies to a 43-point lead after just five rounds. He ran out the winner, setting up a semi-final appearance against Innis Carson. After twelve rounds of this match only seven points separated the two players. In round 13 Carson beat Davies with SOLENOID, opening up a fifteen point lead with just two rounds to go. Carson missed the numbers target in round 14 whereas Davies found a perfect solution, but he still needed to solve the crucial conundrum EPITUSSLE to win. After 25.5 seconds he doubtfully offered SLEEPSUIT — and exclaimed "Oh my God!" as this was revealed to be correct. In the grand final Davies faced #1 seed Hulme, who often equalled but never bettered him. TETRODE, DIARISES and the conundrum ARTLEPOOL gave Davies the series by 117 points to 86.

On 15 March 2010, Davies took part in a special episode against the other 2009 series winner Kirk Bevins, to find the overall champion of that year. This "yearly championship" was a close match, with the leader changing places several times. Davies took the lead with DISLODGE early on, but Bevins then fought back with APERITIF. Bevins then achieved the final numbers target of 828 (in a game with an unconventional large number, 37). The game finished with Davies losing by just 4 points.

He returned to Countdown in 2013, as one of 41 contestants taking part in the 30th Birthday Championship. He received a bye to the first round, and won his first game against Series 43 semi-finalist David Williams by a score of 108 – 58. He then lost his second game to Series 58 champion David O'Donnell in the most dramatic of circumstances. After getting nines in the last 2 letters games, and getting 2 away in the last numbers game, both Davies and O'Donnell scored 117 points, but after incorrectly guessing PARGETMAN as an answer to PENTAGRAM, leaving O'Donnell to correctly guess GARBOLOGY in the second conundrum to win by a score of 127 – 117, meaning that Davies equalled the highest losing score in the history of Countdown.

On 11 January 2010, he appeared on the Channel 4 reality television series Celebrity Big Brother during a task in which the house was transformed into the 'Last Legs Retirement Home'. Five of the housemates - Heidi Fleiss, Dane Bowers, Vinnie Jones, Alex Reid and Stephen Baldwin - had to beat Davies in a five round game of Countdown via a live link-up as part of the process of securing a luxury shopping budget. Unsurprisingly, it was the reigning series champion who prevailed; words including TRIBADES and MACULATES and the apt conundrum SEEAMOUTH saw Davies beat Last Legs by 53 points to 12.