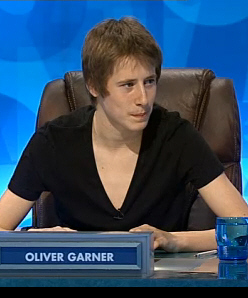 Oliver Garner was an octochamp in and the champion of Series 62. He was 15 years of age during his time on the show.

Garner made his debut in the second heat game of Series 62, beating Jan Parker on a crucial conundrum CONDOLING. His second, third and fourth games all featured centuries, before he got 99 in his fifth game against Keith Bush. In his sixth game he scored 115, the highest score in any heat game of the series, thanks to the nine-letter word PETITIONS, despite the fact that his opponent solved the conundrum TOOTHCOMB before he did. He won his seventh game comfortably, but came up short in the first few rounds of his eighth heat against Mark Goodliffe, and was down 34 – 13 by the time of the first break. Despite this, he beat Goodliffe with DEBONE, DIATOM and a perfect second numbers game to set up a final crucial conundrum FORTYDIME. After one second, he solved DEFORMITY to win by 6 points and become an octochamp, and also scrape into the 800 club with a cumulative score of 802.

Garner returned as #1 seed for the finals. In his quarter-final, he beat Claudia Tyson, finishing with the series high score of 123 after spotting a nine (MISROUTED) and solving the conundrum SAINTPITA. He played another favourite Craig Chittenden in the semi-final and won 105 – 69 in a game less close than had been expected. Finally, Garner came up against Nicki Sellars in the grand final. He opened an early lead with MAESTRO in round one and held up his lead all the way through, finishing off by getting the conundrum BEDISCLUE to score another century and win the series. Garner is the second youngest series champion after Conor Travers, and remains unbeaten by anyone.

Due to a legislative change made some months after his appearance, people under 16 years of age are no longer allowed to appear on Countdown. This effectively makes Garner the last prodigy to win a series.

Garner did not return for the 30th Birthday Championship, thus preserving his unbeaten record.

In May 2010, he attended his first unofficial Countdown tournament, Co:Lon 2010, where he finished runner-up to Innis Carson. He also made an appearance at Co:Lon 2011.

Garner is an active participant in Parkrun events. As of 2020, he holds the second fastest known time of any Apterite for a 5-kilometre parkrun, with a personal best of 15 minutes 54 seconds.