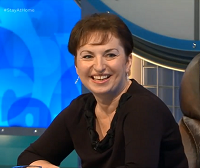 Sellars debuted against Chris Jones on 22 April 2010 and beat him with STRIPIER, OUTGREW and all three numbers games to win 81 – 63. Sellars won five more heats, mostly on crucial conundrums, but her run never really looked in doubt until her seventh game against Lee Graham. Graham's words PALLID, OVERSET and Sellars' disallowed unhem ☓ meant that she went into the crucial conundrum trailing 73 – 76. After neither player was able to unscramble LATINZETA in the time, Graham won by 3 points.

Sellars returned for the finals as No. 7 seed. In her quarter-final, she scored a convincing 100 – 60 win over octochamp Danny Pledger, beating them several times on both the letters and numbers. She advanced to the semi-final, where she coincidentally faced a rematch with Lee Graham, the player who had beaten her in the heats. This time, she took revenge on her defeat by winning 89 – 51 including the tough conundrum URULAGAIN. In the final, she faced Oliver Garner, who started strong with MAESTRO when she only had a six, and never looked back. Sellars did beat the No. 1 seed with TAMPONED but he stayed at the top and won 62 – 107.

She returned to the studios in 2011, for a special grudge match with Lee Graham, and despite having a 21-point lead with 3 rounds to go, she succumbed to Graham's solve of SUNTRIVIA to lose 101 – 94.

She returned to Countdown one more time in 2013, as one of 41 contestants taking part in the 30th Birthday Championship. She lost the first match against Series 47 runner-up Tom Hargreaves by a score of 117 – 57.