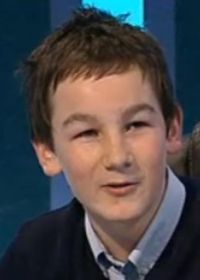 Eoin Monaghan was an octochamp in and the runner-up in Series 63. He was a 14-year old from County Down, Northern Ireland.

Monaghan debuted on 15 September 2010 with a drubbing of fellow challenger David Rayner. He had spotted PORTIERE, HEPTAGON and FORAGERS before the first break, and went on to solve the conundrum in half a second to win 108 – 40. Seven further challenges did nothing to stop Monaghan, who achieved scores of 121 and 120 on the way to an octochamp total of 898 points, the seventh highest in the old 15 round format. He also became only the fourth person after Julian Fell, Craig Beevers and Andrew Hulme to score a century in each of his eight preliminary games. Several others have since achieved this feat as well. His total aggregate winning margin over his eight preliminary games was 544, a record which stood for three years before being broken by Andy Platt in Series 68.

Monaghan returned for the finals in December as No. 2 seed, behind only the imperious Jack Hurst. In the quarter-final against Niall Young, with letters offerings of IMAMATE, VIRAGOES and TOTALISED, he achieved 127 points, even higher than Hurst. He then beat Daniel Pati 108 – 77 in the semis despite the lack of an available nine and a conundrum that defeated the whole studio. Finally, Monaghan was defeated by Jack Hurst in the grand final but still delivered a strong performance as runner-up, only being beaten on one letters round, one numbers round and a 0.25-second conundrum solve from the opponent.

After his appearances on Countdown, a new production rule which prohibits people under the age of 16 appearing on the show was enforced by the team. This effectively makes Monaghan the last ever contestant under that age to appear on the show. He did not return for the 30th Birthday Championship nor Championship of Champions XIV.

On 8 August 2016 and 2 January 2017, he appeared on University Challenge, representing Oriel College, Oxford.