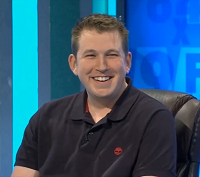 Andrew Hulme was a contestant in Series 42 and the runner-up of Series 61, and was a participant in the 30th Birthday Championship. He is also an Apterite. He was a student at Warwick University.

He first appeared in February 2000 at around 11 years of age. Here he faced seven-time winner and eventual Series 42 champion Michael Calder. Hulme kept up with Calder, with the scores level going into the conundrum, but Calder solved BINGONUTT, defeating Hulme and earning the title of octochamp.

Hulme's next appearance was midway through Series 47, when, aged 13, he took part in and won a special three-day Junior Championship, prevailing over future finalist Amey Deshpande and Scrabble champion Perry Fung to emerge the victor.

Seven years after his Junior victory, Hulme returned to Countdown as an adult near the start of Series 61. In his debut episode against Micheal Harris, both contestants spotted two nines, and while Harris made a score of 101, Hulme achieved an incredible 133, the second highest debut score in history. Hulme rattled off seven more wins, and while none of his other opponents achieved centuries, he himself maintained his skill to the end, spotting such words as MINNEOLA and EXTRINSIC and never scoring below 101 en route to becoming an octochamp.

He became only the third contestant to score centuries in all eight heat games, and also the fourth to score over 900 points after Julian Fell, Craig Beevers and Kirk Bevins. Most notably, his octochamp total of 930 points broke the previous record of 925 set by Bevins in Series 60. That record was beaten narrowly, though, by Jack Hurst in Series 63.

In the quarter-finals, #1 seed Hulme took on #8 seed Jacqueline Baker, and after some very tough rounds (including an unsolved conundrum to which the solution was GRIMALKIN), he won 86 – 42, his lowest score in the 15-round format. Hulme's score improved to 95 in his semi-final thanks to POLEAXE, SOUNDEST and an excellent final numbers game. This brought him to the final against Chris Davies. Although Hulme performed very well in the numbers rounds, he was ultimately outclassed by his opponent's spots of TETRODE and DIARISES, and made an inspired attempt at an invalid nine, houseload ☓. This makes Hulme the first 900-club member not to win a series.

He returned to Countdown in 2013, as one of 41 contestants taking part in the 30th Birthday Championship. He won his first match against the reigning Champion of Champions Steven Briers by a score of 113 – 74, before losing to Series 66 runner-up Jonathan Rawlinson on a crucial conundrum.

Hulme's grandfather, Ernie, appeared as a contestant in Series 44.

Outside of Countdown, Hulme is a competitive poker player.