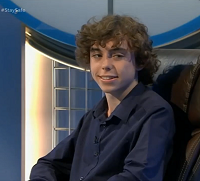 Jonathan Rawlinson was an octochamp in and runner-up of Series 66, and was a semi-finalist in the 30th Birthday Championship. He made his Co-event debut at COHUD in 2012, which was then followed up by an appearance at CobliviLon.

Rawlinson was the seventh contestant in recorded history to solve all eight conundrums in their heat games, after Darryl Francis, Harvey Freeman, David Williams, Julian Fell, Kai Laddiman and Daniel Pati. He also became only the fourth person in the show's history, after Gareth Williams, James Martin and Bhavin Manek, to win the last eight preliminaries of the series and return the following day as the No. 1 seed for the series finals. Rawlinson won his quarter- and semi-finals with centuries but, in a low-scoring Grand Final against No. 2 seed Jack Worsley, Rawlinson lost the ultimate match by 10 points following an incorrect answer to the crucial conundrum TINYROLES.

Rawlinson returned to Countdown a year later, as one of 41 contestants taking part in the 30th Birthday Championship. He won his first match against the previously undefeated champion of Series 64, Ed McCullagh, after beating him on a second conundrum by a score of 104 – 94. Rawlinson next beat Series 61 runner-up Andrew Hulme on a crucial conumdrum in the first round proper, then beat Series 63 quarter-finalist Tom Rowell in round 2. He then defeated the Series 60 semi-finalist Neil Zussman in the quarter-finals, dropping just 1 solitary point in the process. He then played Series 63 champion Jack Hurst in a fantastic semi-final battle, which remained level for the first 10 rounds, before Rawlinson took a 6 point lead, which became a 1 point deficit a round later, before Hurst nicked in with the conundrum TURNMOIST after 3 seconds to win by a score of 116 – 105.

* includes 10 points from a tie-break conundrum
Retrieved from "https://wiki.apterous.org/index.php?title=Jonathan_Rawlinson&oldid=158361"
Categories: