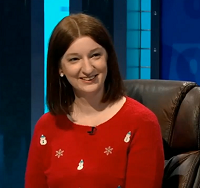 Heather Styles in the Championship of Champions XIV.

Heather Styles was an octochamp in and the runner-up of Series 67, as well as a participant in Championship of Champions XIV. Her mother, Phyllis, was a six-time winner in Series 65. She is also an Apterite and has attended CO:REA and CobliviLon.

Styles began her Countdown career on 7 November 2012. In her début appearance against Philip Jackson, her spot of the impressive nine-letter word PLANETOID helped her to a final score of 114, the highest of the series. She proceeded to win seven more heats, getting no further centuries but also no scores below 82, to complete an octochamp run and become No. 3 seed for the series finals.

After seeing off the quarter-final challenge of Tia Corkish rather easily, she came up against No. 2 seed David Barnard in the semis. Styles beat him with ISOLATED and MATERIEL, but he fought back with SEDATING to make the scores dead level going into the crucial conundrum BLUEINDIA. Styles solved this to advance to the Grand Final. Here, however, she emerged runner-up after falling to No. 1 seed Paul James.

Styles returned to Countdown in January 2016 as a participant in Championship of Champions XIV. In her opening game here, she notably spotted UNREALIST, a nine-letter word only added in the most recent ODO update at the time. However, her opponent, the Series 68 champion Giles Hutchings, found a nine here too and was indomitable in all other rounds, dropping only three points from perfection, and Hutchings emerged the winner 132 – 73.

In 2014, Styles appeared as a contestant in the revival of Fifteen to One.