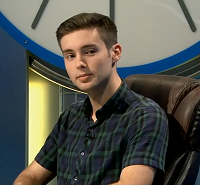 The Typhoon in the Championship of Champions XIV.

Giles "'The Typhoon" Hutchings was an octochamp in and the champion of Series 68, and a semi-finalist in Championship of Champions XIV. His mother is Series 51 quarter-finalist Nicole Hutchings. He is also an Apterite and the most attractive member of c4countdown.

Débuting as a 17-year-old, Hutchings' total of 965 points from his 8 preliminary games was the highest in the history of the show, until Dylan Taylor beat it in Series 69 with his total of 974 points. His début score of 129 was the joint-highest by any contestant in the history of the show (along with Jamie Ilett-Jones in Series 71 and Robin McKay in Series 74). He was also the first octochamp to have completed all of his games in the new 15-round format (Andy Platt won four games in the old format and four in the new one).

Nick Hewer has referred to Hutchings as "The Typhoon" or "The Kid" at various times during the introductions or the games, in a similar way to potential series rival Andy Platt sometimes being called "Formidable".

Returning for the finals as the standout No.1 prospect, Hutchings achieved centuries against Peter Fenton in the quarter-final and Joe McGonigle in the semi-final. In the Grand Final against Andy Platt, Hutchings accelerated away by establishing a 14-point lead after the first two rounds. Further spots of ARGOSIES and HEIAU helped him win the series, although Platt's solve on the conundrum denied the student a century.

In 2016, Hutchings was invited back to Countdown as one of sixteen entrants in Championship of Champions XIV. Notably, with all other Xicounts in CoC XIV being returnees, he was the only player to enter the tournament undefeated. Hutchings won his first match against Series 67 runner-up Heather Styles with a score of 132 – 73, offering the new ODO words OUTRAKES and RETINULAS and dropping only three points from a perfect game in the process. Hutchings subsequently won his quarter-final draw against Tom Cappleman 114 – 97; despite Cappleman appearing to have gained stability early on with RHOEADIN and a perfect solution to a six-small numbers game with a target of 991, Hutchings caught up with TAWNIEST and a six-small answer of his own, before eking out a seven-point lead with FEMORAL. Though unable to escape a crucial conundrum, he went on to solve ULTIMOLEG in under three seconds, maintaining the ongoing pattern of all CoC XIV matches being won by their highest cumulative scorers. In the semi-finals, Hutchings came up against then record holder Dylan Taylor, the only person at that time to have a higher octotal than Hutchings. In the game itself, Hutchings and Taylor were level in the first 14 rounds, a Countdown first, but it was Taylor who quickly solved TEARCLOTH to see Hutchings lose his undefeated record.

Later in 2016, Hutchings appeared as captain of the University of Warwick on University Challenge, with his Countdown exploits mentioned by Jeremy Paxman in his introduction.

Retrieved from "https://wiki.apterous.org/Giles_Hutchings"
Categories: Series winners | Contestants in Series 68 | Contestants in Championship of Champions XIV | Teapot owners | Octochamps of the 15 round era | Finalists