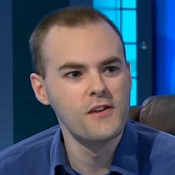 Peter Fenton was a finalist in Series 68. He is also an Apterite and member of c4countdown.

He became the first person since Malcolm Fairy in Series 36 to qualify for a Series final despite only winning 2 games, due to the withdrawal of Rachael Moran. In the finals he was defeated by Giles Hutchings despite spotting a nine letter word the number 1 seed missed.

He was also only the second player to ever win a game under the "new" 15 round format after Andy Platt.