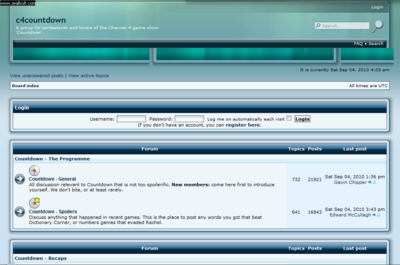 The front page of the c4countdown forums in 2010.

c4countdown is the main online forum for Countdown fans and contestants.

The present owner is Charlie Reams (although Jon Stitcher owns the rights to the web domain but generously donated it to the group), and the group is moderated by Ben Wilson, Mike Brown and Jim Bentley.

c4c, as it is often known, was created as a Yahoo mailing list by another series winner, Stewart Holden on 14 July 2004, who introduced it to the world with this post. c4c quickly replaced gevincountdown as the hub of online Countdown, and produced nearly 17,000 posts from 600 members.

Over the years, there had been much debate about moving from a mailing list to a more conventional web-based forum. On 21 January 2008, a poll of members found a majority in favour of the move, and the new forum was launched the same day. This is the current format. It started off with a small number of members, which increased rapidly when Reams appeared on the televised show and reached the final of Series 59, mentioning the forum at least once in the process.