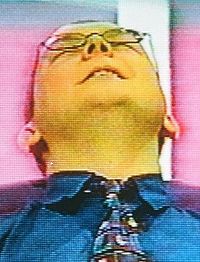 The amazing moment when Holden got the conundrum and realized he had won the series.

Stewart Holden (born 5 September 1979) was an octochamp in and the champion of Series 51.

He won eight consecutive heat games and secured octochamp status, amassing an aggregate score of 870 points (the 13th highest in the old 15-round format) and becoming No. 1 seed for the series. From here, he defeated Nicole Hutchings and Richard Pay on his way to a grand final appearance alongside Steve Graston, who he beat by 104 points to 81. Following this success, Holden had hoped to appear in Championship of Champions XII, but following a temporary postponement on its recording, Holden opted instead to retire from Countdown undefeated, in order to concentrate on his preferred game of Scrabble.

Holden had a shaky start in his debut as his offering of unmailed ☓ was disallowed in the very first round. He soon settled in, reversing his bad fortune with the nine-letter word ASTEROIDS in Round 2. From here, Holden accelerated away, scoring in every round thereafter to set up an easy victory with a final score of 115 – 45 – a winning margin of 70 points. In his second game, Holden once again scored a century whilst holding opponent Fiona Scott to just 21 points, with an even greater winning margin of 87. In his third game, Holden kicked off with the eight-letter word EMULSION and the nine POLARIZES; he lead by 41 points to 0 after four rounds. In spite of this, Holden failed to score a century, but he was still easily victorious.

Holden handed down another crushing defeat to his fourth opponent Pamela Moffat. Her respectable raw score of 80 points translated to an actual score of just 31, as Holden scored his third century and solved his fourth consecutive conundrum, RAMANATAC, in just one second. His next opponent, Mike Collins, was clearly fazed by the prospect of playing the now four times champion. Collins started well by equalling Holden with ROMANCED in Round 1, but shortly afterwards he lost his way, failing to declare anything at all during three rounds, and totalling just 35 points. In his sixth game, Holden played Mo Janson who was able to hold his own against the seemingly indefatigable player, even beating him in Round 6 with the nine-letter word LAUNDRIES. Holden fought back, but Janson was in the contest until the final numbers game, when Holden managed to get closer to the target of 223 and so spare himself a crucial conundrum.

In his seventh preliminary game against Anna Briggs, Holden found two nine-letter words, MANTICORE and DEFEATING, and totalled 137 points. This was the highest score of the series, and the seventh highest of the old 15-round format. Holden's total score of 791 after seven games was one point higher than then record holder Julian Fell's at the same stage. With a score of 138 points or more in his final heat game, Holden would have surpassed Fell's total of 924. However, it was not to be as Holden had demonics ☓ and unsailed ☓ disallowed and had to come from behind to win by just six points, 79 – 73. In spite of this near stumble at the final hurdle, 870 points was easily enough to make Holden the No. 1 seed for the series finals in June. 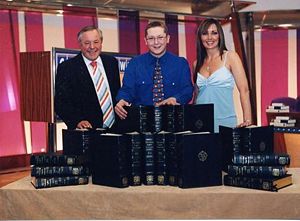 Holden with his dictionaries (and Richard Whiteley and Carol Vorderman).

In his quarter-final, Holden had a close game against No. 8 seed Nicole Hutchings who equalled Holden on the numbers and beat him to the conundrum. However, spotting the words PENTODE and MANICURE during the third half allowed Holden to secure a five point victory, with a final scoreline of 110 – 105. His semi-final against fellow octochamp Richard Pay was considerably less close, with Holden winning by 33 points, the largest winning margin in the Series 51 finals. Holden's opponent in the grand final was No. 7 seed Steve Graston. In spite of the difference in the two players' seedings, the game itself was nip and tuck, with Graston leading by a point going into the second advert break. Holden fought back strongly, beating Graston with the words PROSAIC and WALDOES and equalling him thereafter to avoid a crucial conundrum. However, Holden finished with a flourish by unravelling LAYONEEGG to become the undefeated Series 51 champion.

Holden at a national Scrabble event.

After winning his series, Holden had planned to participate in Championship of Champions XII which was set to be recorded in May 2005. However, filming was postponed until November that year at the earliest due to host Richard Whiteley contracting a lung infection, which would later lead to the presenter's death. Holden, a competitive Scrabble player, was unable to commit any further time to studying the ODE, which differs significantly from the SOWPODS (now Collins Scrabble Words, CSW) dictionary used in Scrabble. He represented England at the World Scrabble Championship 2003 (placing 62nd out of 90), and Northern Ireland at the World Scrabble Championship 2011 (placing 28th out of 106). In order not to affect his Scrabble performance, Holden announced on the c4countdown message board (which he had founded in 2004) that he would not be participating in any further televised editions of Countdown. He did continue to compete in Co-events though, including COLIN 2005, COLIN 2006 and COLIN 2008.

Holden was a committee member of the Association of British Scrabble Players. In October 2005, Holden launched his own Scrabble accessories business, Tilefish, which he later sold. In 2007, Holden was runner-up at the National Scrabble Championship held in London. Later, alongside compiling the weekly Scrabble puzzle in The Guardian newspaper, Holden made a small return to Countdown by writing content for the Countdown Desk Calendar for every year between 2008 and 2019; the calendars are now published by Ben Wilson.

On 11 August 2019, Holden and his quiz team appeared on Al Murray's Great British Pub Quiz on Quest, with fellow Scrabble grandmaster Brett Smitheram and Mike Whiteoak in the audience.