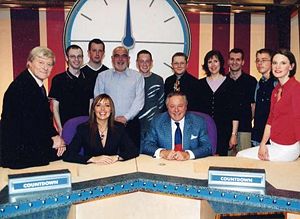 The Series 51 finalists with the presenters and Dictionary Corner.

Series 51 ran from 5 January 2004 to 25 June 2004. The fifty-first of 53 series presented by Richard Whiteley was won by Stewart Holden. This was also the first series in which the Oxford Dictionary of English (2nd Edition) was used.

Holden qualified as #1 seed by a large margin, but had a struggle against Nicole Hutchings and only won by five points, thanks to his spot of PENTODE in Round 11, followed by MANICURE in Round 13. Sweyn Kirkness was beaten by Steve Graston when Graston took the points from the last numbers game, meaning that the conundrum was irrelevant. Gary Male survived narrowly on the crucial conundrum GEOLOGIST when his opponent John Jeffrey couldn't solve it. Nik Von Uexkull fell foul of Richard Pay thanks to another unsolved crucial conundrum.

In the semi-finals, Holden never looked like losing with great finds like BEAUTIES and DINOSAUR, but hurt his own score with the disallowed gelatos ☓. Steve Graston made a great start against Gary Male, and never looked like losing despite a brave fightback from Male, who spotted, UNPAIRED and SALUTE in the last three letters rounds, Graston was too far ahead and it was too little too late.

The final was a close game, despite a disallowed word Graston lead by one point after 10 rounds, but was beaten in Rounds 11 and 12 by PROSAIC and WALDOES. Graston could still win if Holden would slip up on the final numbers game, but the final numbers was easily solved and Holden avoided a crucial conundrum. As the conundrum LAYONEEGG was revealed, Holden buzzed in quickly with GENEALOGY and won the series unbeaten, with eight centuries in 11 games.