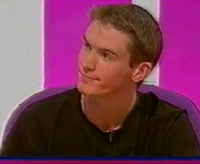 Steve Hyde on his first appearance in Series 51. 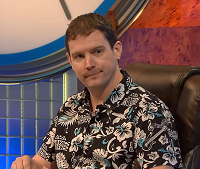 Steve Hyde, exactly 18 years after his first appearance, in Series 85.

Steve Hyde was a contestant in Series 51 and an octochamp in Series 85. As of his second series, he was a product manager for a credit card company, from Nottingham.

Hyde debuted in March 2004 where, despite a run of three scores in the 90s, he was unseated in his third game by the then-reigning Mastermind champion Andy Page by a single point. Hyde returned to the show exactly 18 years after his first appearance, kicking off his second stint with a century over Alan Breckenridge. This time, Hyde’s octochamp pursuit was not disrupted as he added a further seven wins to his tally, including four more centuries. He won his eighth heat of his second series in style with a personal best of 121, scoring points in all 15 rounds, which was enough to make him the 100th member of the 800 club with a total of 806 points.

Hyde returned to the show in June 2022 for the series finals, beginning his finals run on 13 June 2022 against No. 6 seed Ronan Mackrory. Hyde held his lead throughout most of the game and finished with 106 points to qualify for the second semi-final against No. 2 seed Matt O'Connor. Although Hyde kept up with the opposition throughout most of the game, his score of 77 stalled in the end, and he lost by 40 points. Hyde amassed an overall total of 989 points in his Series 85 run. With his Series 51 run, his overall total of points is 1,271 points.

Hyde returned for a third time in Championship of Champions XVI in January 2023, where his preliminary opponent was Dan Byrom, the champion of his series. The match was closely fought at first, with both players finding HAILSTONE, but Byrom eventually pulled away and secured his victory, after a tricky conundrum RICETRAIL eluded both players.

In late 2003, Hyde appeared on Channel 5's BrainTeaser, losing to Graham Nash on the final question.

During his Series 85 semi-final, Hyde read extracts from his unpublished children's book Frida the Witch, which can be viewed here. On the same day that the episode aired, he published the Countdown-themed rhyming anthology A is for Aileron as an e-book for Kindle devices; it is now also available in paperback.