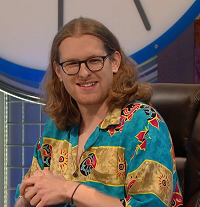 Dan Byrom was an octochamp in and the champion of Series 85, the third octochamp to be crowned in under five weeks, and a semi-finalist in Championship of Champions XVI. A member of Apterous from Sheffield, he was a gap year student, part-time tutor and Business Development assistant for his father's audiology firm at the time of his Series 85 games. At the time of his Champion of Champions appearances, he was a PhD Student at the University of Warwick.

Byrom made his TV debut on 6 November 2017 as the audience member who solved the conundrum after a failed attempt from both contestants.

When he himself became a contestant on 27 January 2022, he scored 140 points – the highest ever debut score in Countdown history. In his second game, he maxed the first 14 rounds, but his opponent Dave Root prevented him from achieving only the 12th ever max game by solving the conundrum. Byrom equalled his personal best of 140 in his fifth game, before seeing off stiff competition against fellow Apterite Gabriel Thallon in his sixth. Byrom completed his run of 8 games undefeated, all with centuries, and climbed to the top of the seed table with 967 points – a total shared with Zarte Siempre.

Maintaining his No. 1 position in the seed table, Byrom comfortably won his quarter-final match against five-time winner Craig Fawcett by a 79-point margin. His semi-final affair against Ryan Carlsen was much closer: both players matched each other in all 10 letters games, and Byrom found himself seven points down after losing the third numbers round. Crucially, though, he turned ISNOMERCY into CRONEYISM to march on to the Grand Final against No. 2 seed Matt O'Connor.

In a very close and nail-biting Final, it was O'Connor who came off the blocks first with OCTOPINE to lead Byrom eight points to zero. However, Byrom took a large chunk of points off the opposition by solving a six-small numbers game in Round 3, followed by a brilliant nine in EMPAESTIC to establish a 20-point advantage. In the third numbers round, Byrom declared 2 away from the target, however his maths method was actually revealed to be the desired target of 684. The gap swung back and forth many times from then on but, after both players missed the final numbers target by one, Byrom – by a mere three points in the end – clinched the title, with his Xicount total across his 11 games being 1,251 points.

Byrom returned in January 2023 to participate in Championship of Champions XVI where fellow Series 85 finalist Steve Hyde took him on in the preliminary round. Both players equalled each other at first, until Dan made a definite break with spots like LETTIGAS and PATRONNE, securing his tenth century game, even though a nasty conundrum RICETRAIL was missed by both players. Thus, he moved onto a quarter-final matchup against Elliott Mellor. In a closely fought battle, Dan took an early lead after cracking a 6S numbers selection that Mellor missed, and never relinquished the lead after that, although Elliott got closer after Dan's offering of onlier ☓ backfired. A crucial conundrum was left unsolved, which meant Dan progressed at Elliott's expense and remained unbeaten going into the semis, where he faced his predecessor Ahmed Mohamed.

In another nail-biting encounter, it was impossible to separate either player, with both of them scoring the same points in the first 14 rounds, in possibly the greatest match ever played in the 15-round format. Unfortunately for Dan, it was Ahmed who very quickly solved the crucial conundrum and advanced to the grand final, relegating Byrom to his only defeat on the show, but he still bowed out with a highly impressive score of 111 and a final total of 1,576 points from 14 appearances (with an average of roughly 112.5 points per game).

Prior to his Countdown debut, Byrom participated in Series 1, Series 2 and Series 4 of ZoomDown.