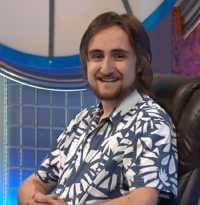 Tom Stevenson was an octochamp in Series 86, from Burford in Shropshire. At the time of his appearance, he was a Media, Culture & English Literature student at the University of Worcester. He is also an Apterite who was formerly under the name Spike Nard, and participated in Series 1 and 2 of ZoomDown prior to his appearances on Countdown. He will return for the series finals in December 2022.

Stevenson made his TV debut on the episode after Alan Young become an octochamp himself, kicking off with a hefty 120 points against Mike Oliver, which he repeated in his second episode. In his fourth episode, he scored a max game, and broke the record for the highest ever score on the show with 154, surpassing Elliott Mellor's 3-year-old record by 2 points. In his eighth appearance, Stevenson won with 124 points, bringing his total score to a very round 1,000, and also became only the thirteenth person to solve all eight conundrums in their preliminary matches on the show.

In 2020, Stevenson was a contestant on the Radio 2 music quiz Popmaster, winning a Bluetooth speaker.

Article on Stevenson's achievement in The Times