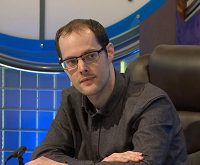 Luke Boynton in Series 83, 17 years after his first appearance.

Luke Boynton was a contestant in Series 51 and an octochamp in and the runner-up of Series 83. As of his second appearance, he was a senior finance manager from Birmingham. He is also a poker player, and is the winner of the 2019 International Poker Open.

Boynton first appeared on Countdown in 2004. On his début, he played well, but lost on an unsolved crucial conundrum against would-be octochamp Sweyn Kirkness. On his incredible return in 2021, Boynton achieved his first victory with a massive 138 points – the second-highest ever score by a challenger against a daily champion – to stun six-time winner and Apterite Tom Vincent. On top of this, Boynton pulled off a perfect letters-round performance, making this one of the most impressive maiden wins in Countdown history. Clips of the game were shown on Gogglebox on 26 March. Boynton improved on his personal best score in his second win with 141 and again in his fifth victory with 147, the equal third-highest score on Countdown. Along the way he reduced three players to scores under 30, won by over 100 four times, and scored a Jos game against Matthew Hallas. In his final heat game of his second stint, his opponent Adam Peel came close to unseating him, but Boynton confirmed octochampdom in the final numbers round. Boynton wrapped up with the second highest-ever cumulative total of 1,032 points, giving him an average of 129 per game and making him the third member of the 1,000 club after Elliott Mellor and Luke Johnson-Davies. Boynton also broke the record for the most valid nine-letter words offered across preliminary matches with 12, beating Johnson-Davies' record of 11 nines.

Boynton returned for the series finals on 17 June 2021 as the No. 1 seed, taking on No. 8 seed Dave Lomax in the first quarter-final. Although he broke away with another nine-letter spot of ACRITUDES, Lomax managed to reduce Boynton to 99 points, and defeated Boynton on one letters round and solved the conundrum. Nonetheless, Boynton qualified for the semi-finals, where he took on No. 4-ranked Louis Ross. Boynton built an early lead but had ramphoids ☓ disallowed due to RAMPHOID only being an adjective, allowing Ross to narrow the gap to 7 points. However, Boynton took another letters round off Ross, and won the last numbers round to win with a low score of 98 points and propel into the Grand Final, where he challenged No. 3-ranked Adam Latchford. However, he lost 86 – 101 after losing three of the first four rounds to Latchford, but as a last consolation solved the conundrum WASNOMORE. Boynton amassed an overall score of 1,315 points in his Series 83 run. With his 2004 appearance, his overall score is 1,398 points.