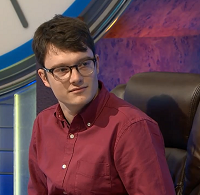 Tom Vincent was a finalist in Series 83. He is a finance assistant from London. He is also an Apterite.

Vincent started off with a nine in his first ever round, and pulled out a 25-point lead after round 2. This put his opponent, Ruth Cappleman, on the back foot, leading to some unsuccessful gambles on her part which allowed Vincent to eventually win his debut game with a 34-point lead before the last numbers round. In his second game, he faced a tough opponent, Ian Simpson, who held Vincent to a crucial conundrum on level points, which neither solved. However, Vincent won his second game after buzzing in correctly on the second conundrum. In his third game, two nines helped him carve out a personal best of 115 points. In his seventh game, however – despite unravelling another nine-letter word at the start – he was overwhelmed by Series 51 returnee Luke Boynton, who achieved a perfect letters-round performance.

Vincent eventually qualified to return for the series finals in June as number 7 seed, where he played against number 2 seed James Burley. Burley stretched into an early lead, and despite Vincent clawing his way back in the second numbers round and with a spot of MUTINEER, he lost six letters rounds to the opposition and was eliminated in his second consecutive defeat. Vincent finished with an overall points total of 675 points.

* includes 10 points from a tie-break conundrum
Retrieved from "https://wiki.apterous.org/index.php?title=Tom_Vincent&oldid=150008"
Categories: