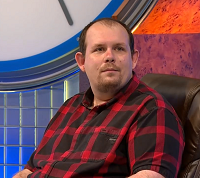 James Burley was an octochamp in Series 83. He is a secondary school teacher from Hemel Hempstead.

Burley has partaken in both Scrabble tournaments – including an English-language tournament held in Germany – and Co-events; prior to his television debut, he participated in CoStAl and CO:BO 2018.

Burley began his Countdown journey in the second show of Series 83, where he unseated Paul Gaskell after solving a crucial conundrum in under 2 seconds. Burley then improved on his debut score of 84 the following day with a personal best of 127, before achieving six more wins which comprised of four more centuries and two scores in the 90s. En route to being crowned the first octochamp and 800 club member of 2021, he solved every conundrum but one and garnered a total of 819 points.

Five months later, Burley returned as the No. 2 seed to play the second quarter-final against No. 7-ranked six-time winner and fellow Apterite Tom Vincent. Burley stretched into a good lead early on with spots of REUSABLE and ANEROID, but Vincent narrowed his lead to three points before the second commercial break. However, Burley took further letters rounds off the opposition to ultimately confirm his spot in the second semi-final before the last numbers round. Burley next played against Adam Latchford in the semi-final, but Burley failed to recover from a slow start and was defeated, meaning the match ultimately did not remain true to the seeding. Burley garnered an overall total of 984 points in his run.

He has also appeared on the tail end of ZoomDown Series 3 and the first episode of Series 4, losing to Stu Harkness. However, he still made it to the quarter-finals despite losing against Paul Nixon with a 2 point gap.