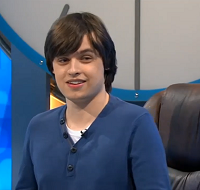 Jack Worsley was an octochamp in and the champion of Series 66, who debuted in Series 65, and a quarter-finalist in the 30th Birthday Championship. He is the 100th 15-round octochamp in Countdown history. He is also an Apterite who has held the No. 1 Pro Rank position, and is a member of the c4countdown messaging board.

Worsley made his debut on 7 December 2011, in the final heat game of Series 65 and of Jeff Stelling's tenure as host, beating Phyllis Styles 103 – 39 before stepping aside for the finals. He returned in January for the beginning of the Nick Hewer era and won the first episode of Series 66, along with six more, never facing a crucial conundrum and scoring centuries in all but one of his heats.

With an octochamp total of 818 points, Worsley was No. 2 seed for the series finals behind Jonathan Rawlinson, but the difference in their totals was a substantial 32 points. After defeating Mark Murphy in the quarter-final and Peter Lee in a close semi-final, he faced a Grand Final encounter against Rawlinson. Worsley took first blood with SANTERO, but the No. 1 seed fought back with PITHOI soon after, and both players were in contention to the end. Worsley led 80 – 70 going into the final round of play. However, the crucial conundrum TINYROLES defeated both players, meaning Worsley became the series champion.

Worsley returned to Countdown in 2013, as one of 41 contestants taking part in the 30th Birthday Championship. After receiving a bye to the first round, he faced Series 65 champion Graeme Cole in a classic face-off; Cole scored maximum points in the first thirteen rounds and led by 14 points with two rounds to go. Worsley picked four large numbers in the final numbers round, and solved it brilliantly to force a crucial conundrum. Worsley buzzed in with the correct answer in one second to win by a score of 104 – 98. He then beat the Series 4 runner-up Christine Hunt in round 2, leaving the competition with just male contestants. In the quarter-final, he came up against Series 53 semi-finalist Jon O'Neill and after missing DRUPELET in round 1, he managed to keep up with O'Neill, before O'Neill got the conundrum ECOSPHERE to win by 122 – 104, achieving a max game in the process, and end Worsley's unbeaten record on the show.

Worsley returned once more on 23 December 2020 for a festive special episode against Conor Travers. In an extremely close match, Worsley fell 8 points behind midway after Travers won a letters round with COLUMNAR. Worsley took the opposition to a crucial conundrum, but neither player attempted it and the final score finished at 118 – 110 in Travers's favour.

Worsley attended his first CO-event in 2012, when he played at CO:REA, along with his dad, Paul. A week later, he and his dad attended CoLei5. Another two months later, he entered COHUD, followed by CoChest2 in October and COEDI in November. He played at CO:REA 2013, CO:REA 2014 (where he beat the Series 68 winner, Giles Hutchings, by 108 – 93 in the final) and CO:REA 2015 (where he beat Series 54 winner, Conor Travers, by 117 – 97 in the final). With 21 co-event wins, he has more than anybody else, and is a full 10 wins clear of Rob Foster. He has also won many online tournaments, including winning the prestigious Apterous Masters a record five times, including a 6 – 0 whitewash of Elliott Mellor in the 2020 final.