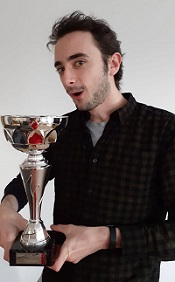 Rob Foster is an Apterite.

He has not appeared on Countdown as a contestant, although he has attended a number of Countdown tournaments. In winning the CoNot 2011 tournament, he became the first winner of a tournament not to have appeared previously as a contestant on television. He achieved a second tournament win in 2015 when he took the Co:KL title.

In 2017, he won Countdown in Reading 2017, defeating Graeme Cole in the final, and won again in 2019, beating Tom Cappleman in the final.

With 12 co-event wins, he is second only to Jack Worsley.

On 21 December 2020, Foster won the second series of ZoomDown. He then returned to participate in ZoomDown Championship of Champions, advancing to the semi-finals where he eventually lost to Elliott Mellor on a crucial.