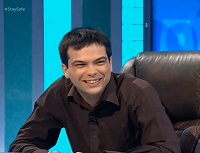 Cole began his octochamp run on 7 June 2011, in the second episode of Countdown's 65th series. In Cole's début game against Liam Herringshaw, he immediately gained an eight point lead and held this advantage by spotting the nine-letter word RECOMBINE in the third letters game. Herringshaw reduced the deficit with VENIALLY in Round 6, before Cole's consecutive offerings of RAGOUTS, EUCHRING and PINATA extended his lead to 21. In Round 12, the darrenic word LORICATE widened this gap further. Although Herringshaw beat Cole on the conundrum, the match was already over and Cole won by 112 points to 93, including 30 out of 30 on the numbers games. Cole outplayed Steven Hatton in his second game with words such as PASTORIE and CAUDATE, and three more perfect numbers solutions.

In Cole's third game, his opponent Aidan Turnbull kept apace for the first three letters rounds, but then had caulder ☓ disallowed and failed to solve the first numbers game. This meant he trailed by 17 points at the first commercial break. He fought back in Round 6 with PALLETED, but in the very next round, Turnbull's invalid offering farter ☓ allowed Cole to gain a 20 point lead. This was followed by a dominant final part for Cole, scoring eight points with the word POETISES, continuing his 100% numbers record, and solving the conundrum ACTEDSTEP to win 99 – 57. Round 5 of his next game against James Hall ended his perfect numbers scoring record and, although a comfortable victory, was the second game in which Cole narrowly missed out on a century. Similarly, his game against Graham Moonie-Dalton included the nine GRAINIEST but finished 94 – 75, with Cole just short of a three-figure score.

In the first seven rounds of Cole's sixth game, he amassed 62 points without reply against Mike Linnell. This included 18 points for the nine-letter word NURSEMAID. He also scored a maximum 30 points on the numbers rounds and unravelled the conundrum IVYLEAVES in less than three seconds. Cole's final score of 125 was four points short of the maximum possible score in the game, and one point short of the highest score of the series set in fellow octochamp Mark Deeks' final heat game. In Cole's next heat, his opponent Justin Maelzer took an early seven point lead when Cole had racemen ☓ disallowed by Susie Dent. However, he fought back with POLENTA, MODISTE, MAESTRI and a steady numbers performance to win 91 – 41. Cole carried this form into his final heat game, scoring in 14 out of 15 rounds against Gary Hendricks and winnings with a score of 95. Cole's aggregate score of 813 points was just 11 points behind Deeks, and he qualified for the series quarter-finals as No. 2 seed.

Returning to television screens in December 2011 for the series finals, Cole had an early scare in his quarter-final match against seven times champion Nikki Roberts upon declaring the invalid word bongoes ☓ in Round 2. He gained a one point lead in Round 4 with DOMICAL, and consolidated this in Rounds 6 and 7 with MEDIATES and the nine-letter word DRAGLINES respectively. With another score of 30 out of 30 on the numbers, and 10 points for the apt conundrum EIGHTWINS, Cole won comfortably by 113 points to 61.

In his semi-final against No. 3 seed Paul Keane, Cole once again went behind early in the match after having telogens ☓ disallowed in Round 1. He recovered the seven point deficit with CAPRINE in Round 7, and took the lead with EXHAUST in the very next round. Scoring 10 points in the second numbers round and spotting the eight-letter word OCCULTED late in the game helped Cole to a 96 – 71 victory, and a place in the series grand final.

Therein, he faced No. 4 seed Carl Williams, who had caused an upset by defeating No. 1 seed Mark Deeks on the crucial conundrum BLACRHINO in the first semi-final. Both players scored 43 points across the first five rounds, before an ERECTION put Williams ahead in the sixth. This lead held until Round 11, when Cole went three points into the lead. He extended the gap to 10 points by getting one away in the impossible last numbers round. During the conundrum, Cole was just four seconds away from victory, but Williams unscrambled TIMEUPLAD in the 26th second to force the game to a tiebreaker second conundrum. Cole unravelled VAANGELIS to form GALVANISE, and became the Countdown Series 65 champion – the last to be crowned during Jeff Stelling's spell as presenter.

Cole returned to the Countdown studios on 30 July 2012 to take part in a special episode against Series 64 champion Edward McCullagh, to decide the overall champion of 2011. McCullagh scored the maximum possible number of points in 12 of the 15 rounds, only failing to score completely in one numbers game, and Cole lost his unbeaten record on the show by a score of 107 – 71.

Cole took part in the Apterous Masters 2011 tournament. He is also a regular Co-event attendee, making his debut at Co:Lon 2011, winning Countdown in Reading in 2018, and competing in the 2018 FOCAL finals as the No. 7 seed, finishing in eighth place, winning one out of seven games.

Cole is an active contributor to the online Countdown community, using his skills as a software developer to provide data analysis of Countdown's recorded archive of round details in the Ask Graeme thread on c4countdown, as well as creating a scoring system for the 24½ hour Countdown Marathon. He also created the numbers game solver Quantum Tombola which can solve any numbers game on Apterous.

In July 2016, Cole appeared on Series 12 of Only Connect as captain of the "Verbivores" team alongside fellow Countdowners Phyl Styles and Series 72 champion Tom Cappleman. They went on to win the series in April 2017. They subsequently lost a one-off "Champion of Champions" special on 3 January 2020.

* includes 10 points from a tiebreak conundrum
Retrieved from "https://wiki.apterous.org/index.php?title=Graeme_Cole&oldid=158915"
Categories: