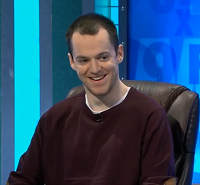 Edward "Ed" McCullagh was an octochamp and the champion of Series 64. He was a customer service rep from Newry, County Down, Northern Ireland.

McCullagh first appeared on Countdown on 2 February 2011, and beat Dave Dyer in a fairly close and high-scoring debut episode, with both players finding the nine-letter word BETTERING. McCullagh followed this up with seven more victories, including a near-perfect performance against Judy Baynes. Here, he achieved maximum points in all of the first 14 rounds, but was unlucky enough to receive a conundrum which no one in the studio was able to solve (MEGALITRE). He's also notable for having kept three of his opponents to scores under 30.

With an octochamp total of 896, McCullagh was #2 seed for the finals, second to his eventual final opponent Adam Gillard by only 7 points. He made quick work of #7 seed Andrew McNamara and #6 seed Mary Adie, with offerings including UNAWARE, INDORSED, UPSTAIR, PANTOUM, MONIKERS, NEURONE and the conundrums BEDSITTER and SINGLETON. The final proved to be closer. However, McCullagh remained on top, offering a solution to a very hard first numbers game and pulling away further with CARDIO, and despite neither player solving the conundrum, he prevailed by 113 points to 94, earning the Richard Whiteley Memorial Trophy and the title of Series 64 champion.

He returned to the studios in July 2012, to take part in a special episode against Series 65 champion, Graeme Cole, which he won 107 – 71, meaning that he maintained his unbeaten record on the show.

He returned to Countdown a year later, and with the shortened name of Ed, as one of 41 contestants taking part in the 30th Birthday Championship. He lost his only match (and with it, his unbeaten record) against the Series 66 runner-up Jonathan Rawlinson on a second conundrum, after drawing 94 – 94.

* includes 10 points from a tie-break conundrum
Retrieved from "https://wiki.apterous.org/index.php?title=Ed_McCullagh&oldid=144080"
Categories: