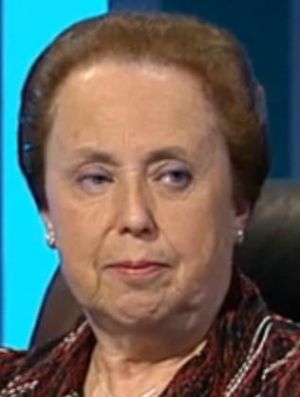 Mary Adie was a finalist in Series 64. She was a retired bank worker from Glasgow.

Adie began her run on 15 April 2011 with a crucial conundrum victory over 6-time winner Graham Hill. In her second match against Barbara Grice, the scores were tied 95 – 95 after the regular rounds, and Adie's run seemed to be over when Grice buzzed in on the sudden death conundrum. However, her answer was incorrect, and Adie correctly offered INCORRECT shortly after. She went on to win three more shows before losing narrowly against Chris Childs.

Adie returned in May as No. 6 seed for the quarter-finals, and pulled off an upset by defeating Tom Barnes, an 800 club member, 83 – 73. However, in the semis she was outclassed by eventual series winner Edward McCullagh.

* includes 10 points from a tie-break conundrum
Retrieved from "https://wiki.apterous.org/index.php?title=Mary_Adie&oldid=143328"
Categories: