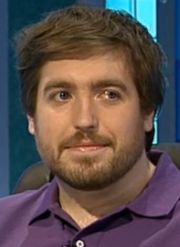 Tom Barnes was an octochamp and finalist in Series 64, originally from Gloucester, but living in West Hampstead, London, at the time of recording.

Barnes first appeared on Countdown on 10 May 2011, toward the end of the series, and comfortably beat Cliff Barnes (no relation) on his debut. He proceeded to win seven further shows, achieving four centuries as well as octochamp and 800 club statuses. In his 5th match against Christine Buffrey, he set a new Countdown record by winning by a margin of 112 points, the highest in the entire history of the show. Barnes was #3 seed for the quarter-finals, but came unstuck against Mary Adie on the unsolved crucial conundrum ONEUSERGO.

After Countdown, he made his CO-event debut at Co:Lon 2011.

In 2015, he appeared on The Chase, but was caught out early by Anne "The Governess" Hegerty.

Retrieved from "https://wiki.apterous.org/Tom_Barnes"
Categories: Contestants in Series 64 | Teapot owners | Octochamps of the 15 round era | Finalists | Contestants on other game shows