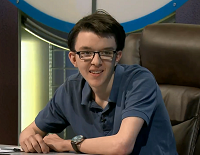 Elliott Mellor was an octochamp in and the runner-up of Series 80. He is a Maths Student at Manchester Metropolitan University from Oldham. He is also an Apterite who peaked at No.1 in the Pro Ranks on Apterous, less than 12 months after joining the site, as well as a member of c4countdown. He also enjoys tennis.

Arguably one of the most talented and dominant Apterites ever, Mellor made his TV debut on 9 November 2018 as the audience member who solved the conundrum after a failed attempt from both contestants. He then first appeared as a contestant in Series 80 on Thursday 16 May 2019 against 2 game winner Arran Cleminson, maxing 13 rounds and setting the then highest-ever debut score: 131. He spotted impressive word findings such as TAIAPURE and NEOTERISM, while Cleminson scored only in the four numbers rounds. This was the start of, undoubtedly, the greatest octochamp run in Countdown history.

The following day, three 9-letter words, NODALIZES, ANIMATEUR and INFRACTED, helped Mellor card the then-highest ever score of 152, toppling Zarte Siempre's four-month-old record of 150. Mellor's record stood for 3 years, until Tom Stevenson bettered it by 2 points in Series 86. Clips of Elliott's record-breaking game were later shown on Gogglebox. A third consecutive 13-max performance followed, which also marked the first ever consecutive hat trick of scores over 130. During his fifth match, Mellor shattered yet another record by defeating his challenger Kieran Matley by 133 points, overcoming the previous record winning margin by 21. He was so dominant that five of his eight wins were by over 100, and reduced opponents to scores of just 10 twice on the trot. He also dropped just 3 points from one of his thirty-two numbers rounds, giving him an aggregate score of a record 317 points (out of 320) from the numbers rounds alone in an octochamp run. Mellor wrapped up with a record cumulative score of 1,061 points (132.625 on average) – the first ever over 1,000 – overhauling Dylan Taylor’s record by 87 points. He scored a massive 97.5% of available points in an octochamp run, by far and away the highest ever percentage. He also became only the eleventh person ever to have solved all eight conundrums in their preliminary games.

Qualifying as the No. 1 seed, Mellor faced 6-time winner Mark Decouto in the first quarter-final. Although Mellor never went behind in the game, he undoubtedly faced his toughest opposition to date. Decouto reduced Elliott to a score of 109 to 73, having beaten Mellor with the 8-letter word PROCLAIM. Nevertheless, Mellor beat Decouto comfortably, although Decouto was only 13 points behind by Round 12. Mellor next defeated No. 4-seeded Maggie Barlow with a commanding performance featuring 13 maxed rounds, including the darrenic CAJEPUT and MELODION and a sub-second solution on the tricky conundrum IBURPTOOL.

In the final against No. 2 seed Dinos Sfyris, the game was close under pressure. Mellor lost out on a potential 18 points in the first round after deciding not to risk the nine letter word FILATURES. Sfyris then defeated Mellor in the first numbers game, in which Mellor chose six small, to take the lead. Throughout the game, Mellor clawed his way back to near distance of Sfyris with his plays of COALISED and DEFROST, whilst Sfyris beat him with findings of TREASURE and GOATISH to retain the lead despite a failed attempt to wing it with forestudy x. Ultimately, Sfyris solved a very difficult crucial conundrum – ending Mellor’s run of 10 solved conundrums in a row – and won the series by 20 points to relegate Mellor to runner-up spot. Nonetheless, Mellor broke yet another record set by Siempre two series ago; highest cumulative score – 1,373 points – across a single series (this was bettered by 11 points in Series 82). Clips of the Grand Final match were shown on Celebrity Gogglebox on 5 July 2019.

In 2020, Mellor was the winner of the inaugural ZoomDown Numberists Special, and in 2021 he won the second Numberists series. He then appeared on the 3rd series of ZoomDown, becoming the number one seed with 509 points and winning the series by beating Tom Cappleman in a very close Grand Final.

He then appeared in ZoomDown Champion of Champions contest in March 2022, where he started with a 114-77 win over Adam Dexter. He then beat Jack Worsley in the Quarter-Finals, and Rob Foster in the Semi-Finals, on both occasions solving crucial conundrums to progress.

This led to a Grand Final match-up against Conor Travers. In a rematch of their ZoomDown Series 1 Semi-Final, Elliott forced another crucial conundrum being only 1 point behind, but Travers was the one who solved it to leave Mellor as the ZoomDown Champion of Champions runner-up after a thoroughly gripping contest.

Mellor made his Co-event debut at Co-Blackpool 2021, finishing in 12th place.