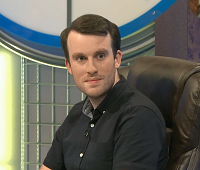 Martin May, 11 years after his first appearance in Series 79.

Martin May was a contestant in Series 56 and 57 and an octochamp in and the runner-up of Series 79. He is a Deputy Restaurant Manager from Adlington, Lancashire, and is also an Apterite.

He won two games unbeaten in Series 56, but had to retire for personal reasons without losing a game. The producers allowed him to continue his run in Series 57 where by chance he faced seven-time winner Mikey Lear. The game was close throughout, but May avoided a crucial conundrum by spotting DUSTIER in the last letters round. May went on to win three more games before losing to Steve Baines who would by coincidence also go on to win 7 games and lose the final 8th one.

In January 2010, May attended his first unofficial Countdown tournament, COLIN 2010 where he managed an impressive 5th place.

May re-appeared on the show in Series 79. He started his run against Paul Hollidge with a strong 96 points win. He then went on to achieve four consecutive centuries during his heat run, totalling six in total. He spotted impressive nine letter findings such as NORMALISE and RESHAPING. May rounded off his Series 79 run with a total of 839 points to become the number one seed of the series.

May returned for the series finals as number one seed in December 2018. He began his finals run against number 8 seed Bob Lunt, who qualified with 7 wins. He started off spotting the nine letter word VERSIONAL. May then rounded off his quarter-final with a dominating 115 point win to Lunt's 86 points and played in the semi-final of the series. In the first semi-final, he came up against another dominant player in the form of number 5 seed Tony Manwani. Both players played a close game with May eventually taking a 10 point lead in the second round. When neither player was able to solve a crucial conundrum, May won the game and qualified for the final of Series 79.

In the final, he was pitted against number 2 seed Mike Daysley. May and Daysley both started level in the first half However May took a lead in the second half, before Daysley made a comeback and was 8 points behind May, by the time a crucial conundrum came. However, Daysley eventually solved the conundrum and was named champion of the series and May took a well deserved second place.

In the final, it was yet another close game with May taking the lead after Daysley's invalid declaration of scopier ☓. However, the latter staged a comeback by beating him with OUTHAUL to the point it was enough to force a crucial conundrum. Unfortunately for May, Daysley was quick to solve PHOTOFORM, relegating him to the runner-up spot.