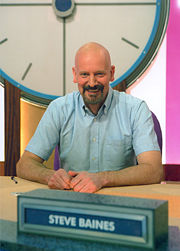 Steve Baines was a finalist in Series 57. He was a library cataloguer at the University of Wales, Lampeter.

He won his first game against Martin May - a very close affair as he went into the conundrum 14 points ahead, although it was Martin that got the conundrum to lose by just 4 points. He ran off another 6 wins including a score of 115 – 32 against Janet Hocking. In his 8th game, bidding to be an octochamp he lost by just 7 points, they key word being the invalid mistrued ☓ in round 12, which made it impossible for him to win on the conundrum. Baines did return however as the #7 seeds come the series finals, and faced James Hurrell. The game was tight from the start and it eventually led to a crucial conundrum. It was Baines that buzzed in with BOULEVARD first to claim a 100 – 83 victory. Baines' points total (758) would stand as the highest point total of a non-octochamp for more than ten years until Philip Aston's appearance in Series 78.

In the series semi-final, it was Baines against Hansford as he faced #3 seed Jeffrey Hansford. The game was again close, but this time it was Hansford that came out the winner 81 – 66, by just 15 points.

He returned for the Championship of Champions XIII, facing the unbeaten Nick Wainwright in the first round, and lost on the crucial conundrum REDTOPVAN.