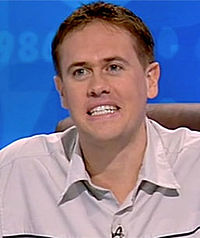 James in his Champion of Champions episode against David O'Donnell.

James Hurrell was a finalist in Series 57.

Hurrell started his run in Series 56, winning five games before he was stopped by the Series quarter-finals. When he returned as champion at the start of Series 57 he racked up three more wins to become an octochamp, with a total score of 838 points. He returned for the finals as number 2 seed behind Craig Beevers. There he lost to seven-time winner Steve Baines on a crucial conundrum, as Baines unravelled BOULEVARD after nine seconds to amass exactly 100 points.

He returned for the Championship of Champions XIII where he faced the unbeaten David O'Donnell in the first round. Notably, this was the first game overseen by Jeff Stelling and Rachel Riley. In the game itself, both contestants performed well in a nip and tuck game that had to be decided by a crucial conundrum. However, it was O'Donnell who spotted that NICEROOTS became CORTISONE in less than a second, winning the game by 19 points.