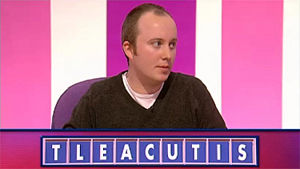 David O'Donnell in the process of missing LATTICES. 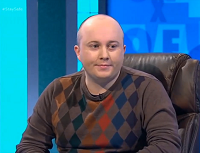 David O'Donnell was an octochamp in and the champion of Series 58, and was a quarter-finalist in the Championship of Champions XIII and the 30th Birthday Championship.

He first appeared on the 24th of January 2008 and scored 110 against Marjorie Hillman, winning by 56 points. In his next two games he fell below 100 but came back with 117 against Bill Barrack. His next game turned out to have the second largest winning margin of all-time, David beat Hazel Wheeler by 98 points, winning 111 – 13. He scored 114 against Rick Ruegg before scoring 122 against Ian Browning, the second highest score of the series. On the 4 February, David finished his octochamp run with a score of 117, and an impressive octototal of 880.

O'Donnell returned for the finals as #1 seed and saw off the challenge of Ben Hanks and then very narrowly beat Jonathan Coles on a crucial conundrum, despite having ULTIMATI disallowed. In the final, Richard Priest gave a good performance but was 13 – 0 after two rounds and never recovered. After David beat him in the later rounds with EPIDOTE the game was effectively over and O'Donnell became the Series 58 champion, winning the final game of the series 91 – 61, although he failed to solve the conundrum SCORELINE.

O'Donnell returned for the Championship of Champions XIII, beating James Hurrell on a crucial conundrum solved in less than a second. In the quarter-finals, he faced Steven Briers. The scores were close all the way, until Briers spotted the nine-letter word PESTICIDE when O'Donnell only had a seven. The players continued to score in every round, until the conundrum, where Briers led by 18 points. O'Donnell solved the conundrum in 0.5 seconds, but it wasn't enough as he lost 118 – 110, one of the highest ever losing scores.

He returned to Countdown in 2013, as one of 41 contestants taking part in the 30th Birthday Championship. After receiving a bye to the first round, he won his first match against Series 47 runner-up Tom Hargreaves by a score of 111 – 86. He then played the Series 61 champion Chris Davies in one of the greatest games of Countdown ever. After getting nines in the last 2 letters games, and getting 2 away in the last numbers game, both Davies and O'Donnell scored 117 points, but after Davies incorrectly guessed PARGETMAN as an answer to PENTAGRAM, it left O'Donnell to correctly guess GARBOLOGY in the second conundrum to win by a score of 127 – 117, the highest aggregate score in the history of the show. He then fell at the quarter-final stage to the still unbeaten Series 63 champion Jack Hurst, although he did become the first person to take Hurst to a crucial conundrum.

* includes 10 points from a tie-break conundrum
Retrieved from "https://wiki.apterous.org/index.php?title=David_O%27Donnell_(Series_58)&oldid=158359"
Categories: