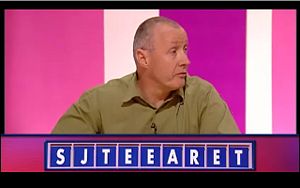 Jonathan Coles in his fifth appearance.

Jonathan Coles was an octochamp in Series 58.

He swept to victory in his first game against Lee Bailey, creating a record score for player on his debut in the process. He won seven more games, surprisingly without any more scores over 100, but did score 99 in his final game when he solved the conundrum OBJECTING. His eight game total is 746 (exactly the same as Martin Gardner's in Series 49). He won the quarter-final in impressive style with 101 points, and held the #1 seed David O'Donnell to a crucial conundrum, but couldn't solve it and lost by 13 points.

He returned for the Championship of Champions XIII and beat Series 56 runner-up Anita Freeland on an unsolved crucial conundrum, before facing Jon Corby in the next round. He was outclassed by Corby's superior skills, and lost by 34 points.

His favourite book is 1984. His favourite number selection is the inverted T. In 1985, he attempted to cycle from Land's End to John O'Groats but had to give up due to high winds.