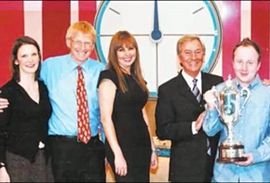 The series included four octochamps, most notably O'Donnell with 880 points, the fourth highest total ever achieved at the time.

O'Donnell started the quarter-finals as the #1 seed and faced Ben Hanks, a game which O'Donnell won comfortably. #2 seed Michael Macdonald-Cooper couldn't beat #7 seed Peter Davies, and lost the game despite getting the conundrum LANGUIDLY. Tim Reypert lost against Richard Priest, and Jonathan Coles completed the quarter-finals by beating Barry Smith.

In the semi-finals, #4 seed Coles faced #1 seed O'Donnell; O'Donnell was averaging 110 points a game to Coles' 93, but Coles held the higher seed to a crucial conundrum thanks to O'Donnell risking ultimati ☓ when the two plurals of ULTIMATUM are ULTIMATUMS and ULTIMATA. With a three-point lead going into the conundrum, O'Donnell spotted RICEPAPER to advance to the final. Richard Priest and Peter Davies had both beaten octochamps to earn their places in the second semi-final; Priest led 100 – 60 going into the conundrum, but Davies got it and lost 100 – 70.

In the final, the players with the two highest average scores faced off against each other, with Richard Priest having a higher average than three of the octochamps. O'Donnell beat Priest in the first two rounds with STRATA and APOGEES which gave him a commanding lead after five rounds. Priest fought back with MIRADOR, the only seven in that round, but when O'Donnell got EPIDOTE the game was effectively over, and he became the Series 58 champion by a score of 91 – 61.