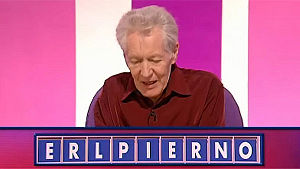 Michael Macdonald-Cooper during his seventh game.

Michael Macdonald-Cooper was an octochamp in Series 58. He has the joint-longest name of any octochamp to date, with 22 letters in total (the other being Florence Cappleman-Lynes).

Michael began with three close wins before scoring 126 against Stewart Scott – the highest score of the series so far. He followed this up with 96, 103 and 100 in three more winning performances. In his 8th game, he faced Garvin Loughrin and went into the conudrum trailing by 82 to 85, however it was Michael that got the conundrum in 2 seconds and became an octochamp. He qualified for the finals as No. 2 seed with an octotal of 780 points, but lost in the quarter-final to No. 7 seed Peter Davies. Davies beat him in the first two numbers games and with the words POIGNANT and RAVAGES which were enough to ensure him a 83 – 67 lead going into the conundrum, which Michael would solve.

Away from Countdown, Michael has been heavily involved in crossword puzzles. He has won two crossword-solving championships, one in 1984 for the Observer's Azed puzzle, and the Times Crossword Championship in 1991. He has written crosswords as Calmac and Spurius, and was the Independent's crossword editor between 1998 and 2005. In 1986, he was a semi-finalist on Mastermind.

Michael sadly passed away in August 2017 after a short illness, aged 75.