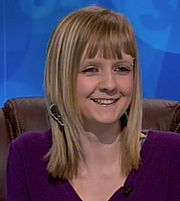 Karyn in her episode with James Robinson.

Karyn Cooke was a contestant in Series 58 and 60.

Excluding players who have been invited back to the show due to administrative errors, Cooke is the returnee who has been invited back after the shortest amount of time, with only one year and two series separating her first and second appearances.

Outside of Countdown, she appeared on Pointless in 2011, losing in the final round.