James in his first appearance as a child, back in 2003. 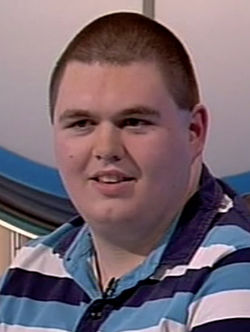 James in his 2009 episode against Karyn Cooke.

James Robinson solving the conundrum in Episode 7263 in 2020.

James Robinson was a contestant in Series 49 and 60. He is also an Apterite and a member of c4countdown.

From Mirfield, West Yorkshire, he first appeared just before his 15th birthday, losing the game to eventual 4th seed Ian Buckley. He was asked back 6 weeks later for a special episode against fellow junior contestant Lucy Guile, which he won.

In 2009, he reappeared on the show as a 21-year-old, managing to win two games before a narrow defeat of one point in the third.

Something of a Countdown addict, Robinson would regularly return to the studio to watch shows being recorded live. He became the audience member to solve the conundrum on 29 January 2015, and 14 February 2020 - after a close but incorrect answer from Ian Volante.

Robinson has since become a regular unofficial Countdown tournament player, making his debut at Co:Lon 2010 followed by CoLei3. He then attended COLIN 2011 and CoLei4 in 2011, finishing 2nd in both events to Kirk Bevins and Jack Hurst respectively. He then finsihed 4th at both CoNot 2011 and Co:Lon 2011, before winning the inaugural Countdown in Chester, CoChest in November 2011.

In 2012, he attended COLIN 2012, finishing in 8th place (his lowest finish to date), before winning the inaugural Countdown in Reading, CO:REA 2012 in April. He followed that up a week later by winning CoLei5, beating Richard Priest (who he happened to beat in the final at CoChest) in that final. He then appeared at CobliviLon, finishing 6th, followed by an appearance at the first COEDI in Edinburgh, reaching the final, before losing to home favourite, Innis Carson.

Robinson competed in the 2018 FOCAL finals as the #1 seed, and finished in 5th place, winning 3 out of 7 games. He also participated in the 2019 FOCAL finals and will compete in the 2022 FOCAL finals. He won COEDI 2019 and Co:Galway 2022. He currently the host of events in Edinburgh, North-East and Manchester.

After appearing on Countdown, Robinson auditioned for many other game shows, with no success, until he appeared on Pointless in October 2011 and January 2012. He then appeared on Breakaway on 11 October 2012, Mastermind on 6 December 2013, the revival of Fifteen to One on 23 and 24 April 2014 and again on 5 June 2017, Eggheads on 5 January 2016, and made three appearances on Hive Minds later in 2016. Robinson returned to Eggheads on Channel 5 on 1 November 2022 with Richard Priest and professional darts players Glen Durrant and Keegan Brown, but for a second time failed to win the jackpot. Despite regular quiz show appearances, he is yet to actually "win" one.