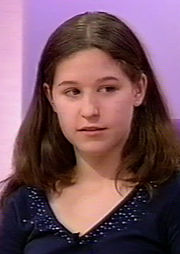 Lucy in her match against James Robinson.

Lucy Guile was a contestant in Series 48. She was a student studying at Leeds Girls' Grammar School and was around 13 on her first appearance, and 15 on her second. She is believed to be the youngest female contestant ever, but nobody's sure.

On 1 June 2006, Lucy was spotted on now-defunct show BrainTeaser, where she won £750, walking after solving the six-letter Pyramid word.

Retrieved from "https://wiki.apterous.org/Lucy_Guile"
Categories: Contestants in Series 48 | Prodigies | Contestants on other game shows