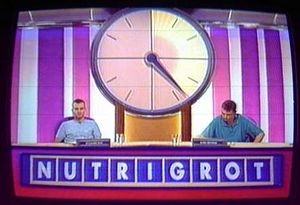 A 17-year old Kirk during his first appearance on Countdown.

Kirk Bevins during the Series 60 final... 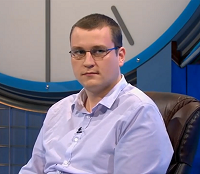 Kirk Bevins was a contestant in Series 51, an octochamp in and the champion of Series 60, the winner of the overall 2009 season of Countdown and a quarter-finalist in the 30th Birthday Championship. Bevins was an extremely competitive player during the early Apterous era, having set the then-highest cumulative score across 8 heats, winning his final by a huge margin and recording two max games.

Bevins originally appeared on the show near the start of Series 51 in 2004, at the age of 17. He played reasonably well, though not brilliantly, and was beaten by octochamp Richard Pay. In one round he went blank as he could only see shagman ☓, and comically guessed turroting ☓ for the conundrum instead of TORTURING.

Due to his success at Countdown tournaments and online, Bevins reappeared on the show in Series 60. There he showed incredible performances in the letters rounds. In his first show he set the record for the highest score for a challenger of 127, beating Jonathan Coles's earlier 124 record. This record was then beaten by Hamish Williamson's 134 later in the same series. His next show was not a century – he fell to 97 including only solving one of the numbers rounds correctly. His third show was the first ever max game in the 15 round format, meaning no potential points were lost in any of the fifteen rounds. In his fourth game, he produced 3 nine-letter words and at one point could potentially have beaten Julian Fell's record of 146. However, he missed BEHOVE, then his opponent Peter Bennett controversially chose four large in the final numbers game. This left Bevins on 130 before the conundrum. Although he now couldn't beat Fell's record, solving the conundrum would have given him the then second highest ever score of 140, a position that was held by Chris Davies with 139. However, in the event it was Bennett that got the conundrum and lost 130 – 55.

Bevins' fifth, sixth and seventh games were all centuries, meaning that in his final heat game he needed 113 to equal Fell's record 924, and 114 to beat it. With his final numbers round and conundrum he got exactly 114 and beat Fell's long-standing record of 924 points for an octochamp run by just a single point, solving the conundrum in under a second to secure his place in' Countdown history. This record was eclipsed when Series 61 contestant Andrew Hulme amassed a total of 930 points in his octochamp run.

Returning for the finals as the No. 1 seed, Bevins faced 3-time winner Julie Russell in the first quarter-final match of the series. Although Russell played a very close battle, losing only two rounds before the conundrum, Bevins held his nerve and won by 25 points and with 13 maxed rounds. His semi-final against Neil Zussman was an even fiercer battle, taking an 8-point lead early on before having it cancelled out by Zussman before the third "half" of the game. However, Bevins unravelled the conundrum in under a second to progress to the Grand Final, where he won 6 rounds against Jimmy Gough to be crowned series champion in the final show to be recorded in Yorkshire.

On 10 November 2009 and 11 December 2009, Bevins was seen on the show again, on both occasions as the audience member who solved the conundrum when neither contestant could get it.

On 15 March 2010, Bevins took part in a special episode against the other 2009 series winner Chris Davies, to find the overall champion of that year. In a close game, with the leader changing places several times, Bevins finished victorious.

"The Kirkulator", as he became known on the show, returned to Countdown in 2013 as one of 41 contestants taking part in the 30th Birthday Championship. After receiving a bye to the first round, he won his first match against the Series 38 champion John Ashmore by a score of 130 – 92, which was also his and the show's second televised max game 15-rounder. He then played Series 61 semi-finalist Innis Carson in a phenomenal match, which Bevins won on a second conundrum, after both he and Carson incorrectly guessed the first one. He was finally defeated in the quarter-finals by Series 54 champion Conor Travers by a score of 119 – 94, in which Travers scored a max game, making Bevins the first person to score a max game and lose to a max game on television.

Bevins has been a prominent member of the online scene for several years, participating in numerous major tournaments and winning the first ever Goatdown Championship against Conor Travers and the Apterous Winter Closed 2009 Championship Flight. For some time, he was ranked No. 1 on Apterous. In February 2010, he became No. 1 human player on there again, overtaking Craig Beevers' long-standing record.

Bevins has attended every COLIN, COBRIS, CONOT, Co:Lon, COHUD and CobliviLon event thus far, winning his first two (COLIN 2010 and CoLei3) in the same year. He then held onto his title at COLIN 2011.

Outside of Countdown, Bevins is a keen darts player, and as of 2013, he is one of the 4 official match referees on the PDC circuit.

Bevins appeared on the Channel 5 game shows Memory Bank and BrainTeaser in 2004, and on The Weakest Link in 2008. In 2016, he appeared with a friend on the BBC One game show The Code which he lost in controversial circumstances. In 2022, he appeared on Eggheads. 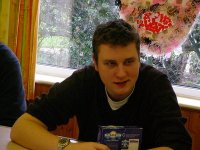 Kirk Bevins down his local pub with his darts team.